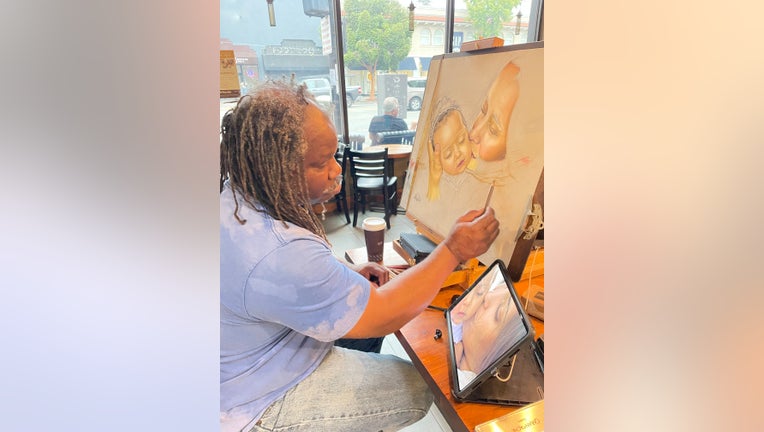 OAKLAND, Calif. - He’s become somewhat of a fixture in his Oakland neighborhood. On any given day, you might find Roosevelt Washington sitting at his favorite coffee shop, Peet’s on Lakeshore Avenue, with a canvas in front him, focused on his latest work.

The 56-year-old formerly homeless Oakland native has come a long way from his days on the streets.

SEE ALSO: Oakland basketball league gets young people off the streets with 'midnight' games and workshops

Nowadays, when he’s not on the job working as a welder, he’s using much of his free time drawing landscapes and portraits.

His Instagram page featured precious and intimate images he’s recently sketched of babies in the arms of loved ones. Depending on the level of complication, a piece might take him an average of two to three weeks, earning him $5,000-$6,000. 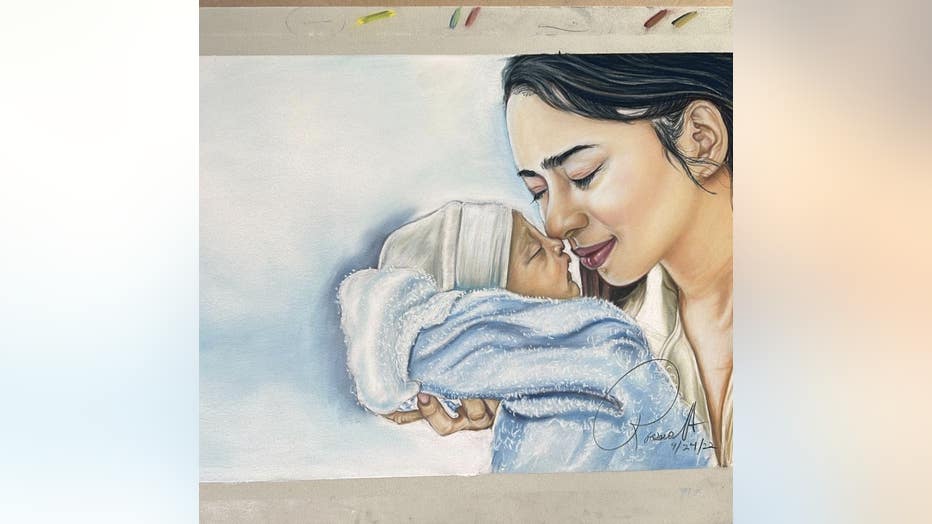 Much of the work he’s done has caught the eye of coffee customers at Peet’s. And his latest string of clientele came quite naturally, without any effort on his part.

Washington said about five months ago, he started going to Peet’s to get some artwork done because his apartment was too small to be productive. He said the coffee shop provided a nice atmosphere for the artist.

"I like the environment, the people, the staff. I can do my artwork with peace of mind," Washington said.

What happened next was unexpected.

"I start drawing and people start asking me to do portraits. So it's a snowball effect. I wasn't trying to get work," the artist said.

Those who have commissioned him for his work, often provide him with digital image, so he can recreate it through his brushstrokes. 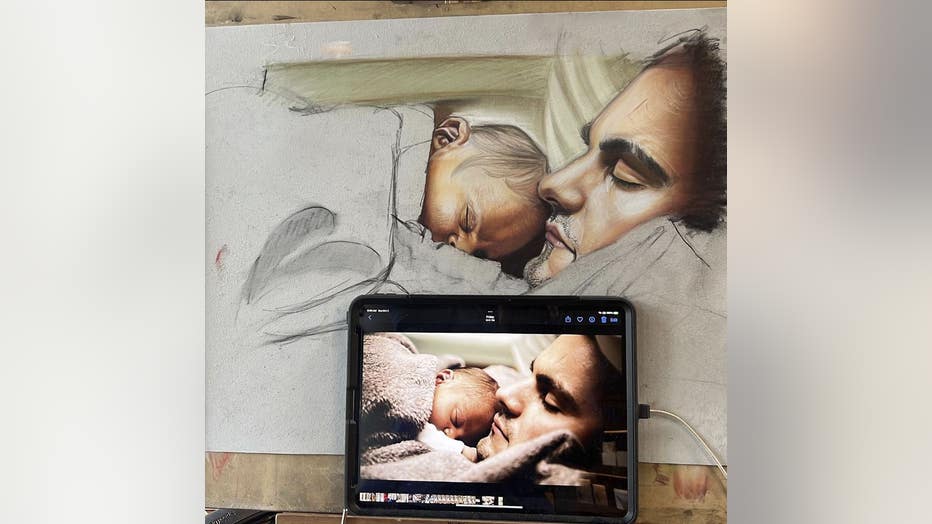 "I just draw what I see. I see a lot of love, and I try and impress that love on that picture," the artist said.

Some of his prior work included subjects he’s gravitated toward, stemming from his ten years being homeless. 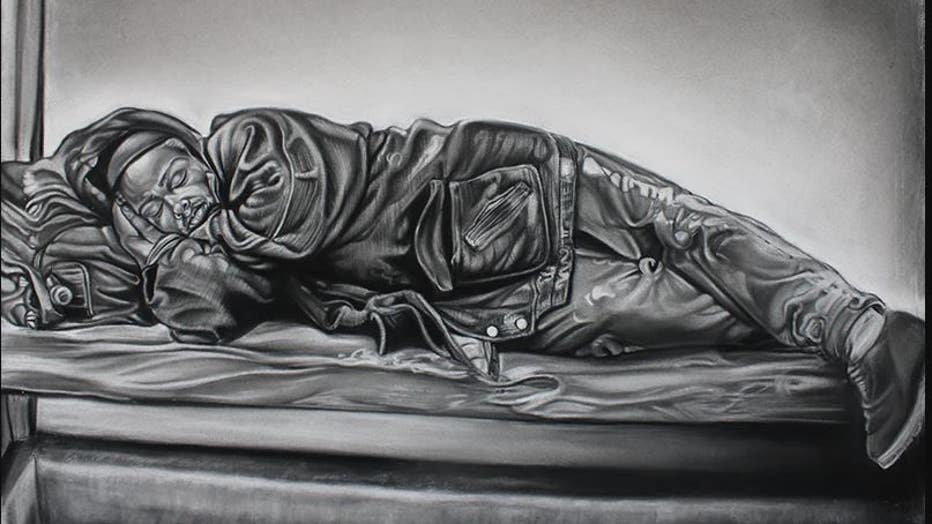 He’s drawn portraits of others he’s seen living on the streets, like the one of a man sleeping on a bench or one of a man having a meal at People’s Park in Berkeley. Washington told KTVU that he often aimed to depict the suffering people go through while "dealing with the struggle of being a human being." 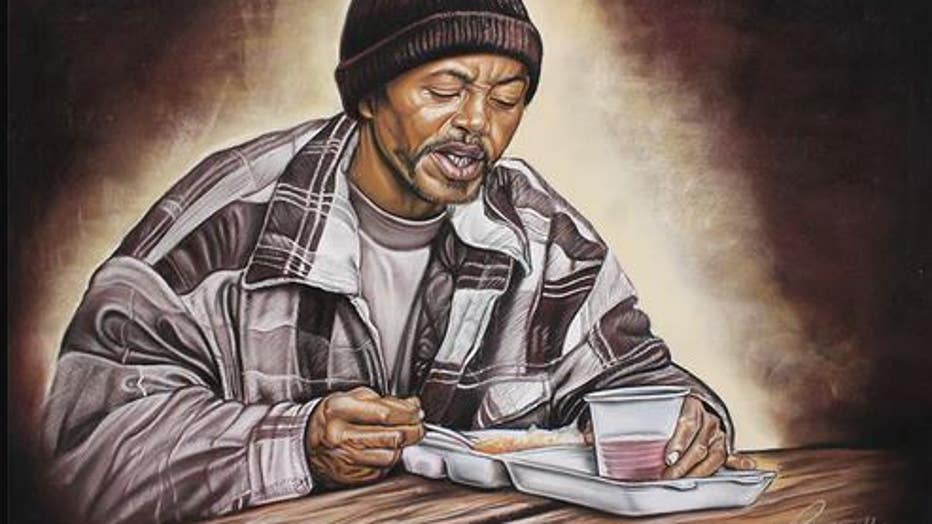 "Man Having a Meal," a painting by Oakland, Calif. artist Roosevelt Washington.

On his website he explained it by saying, "I have lived trying to capture the true emotions of life." Those "true emotions," he said, he learned to recognize during his homeless days, and that experience offered him the clarity to express himself "through art and capture the reality of the human condition," something he's been doing for more than 30 years now.

Washington, who attended Castlemont High School in Oakland, said he was never formally trained in art and was inspired by a former classmate there.

He said that while on the streets he drew on and off, but it wasn’t until later that he really started working on his craft.

His road to get off the streets began when someone offered to teach him how to crochet, an opportunity he said he knew he needed to seize.

With that skill he was able to start selling crocheted hats on Telegraph Avenue in Berkeley. His business as a vendor also expanded to selling incense and handmade oils.

Later, when he realized he couldn’t sustain making a living as a vendor, it prompted him to return to school to learn how to work and create with his hands to become a welder.

Washington said he eventually got his certification through a program at Laney College which led to his job today as a union journeyman welder, a job that's also allowed him to make the time to do his art.

Just as he said it's through his experiences being homeless that made him the artist that he is, he also noted that it’s through all of his experiences and ups and downs that he’s found himself where he’s now.

As a vendor selling hats and oils, "I learned how to invest my money to stay in business and how to treat people the same way to how to come back," he said, adding, "Welding helped me treat people a certain way, keep a job because you're on time, and you're responsible. And running the business, it taught me that," he reflected.

It was through twists and turns that Washington has now found himself creating art that’s catching the eyes of those around him.

What he ultimately hoped for was to eventually make art his fulltime living.

"I love doing it," he said, "You just get this weird feeling you can't put in words. It's an enjoyment. It feels good."

It's an enjoyment was apparently being noticed and spread to many in his community. 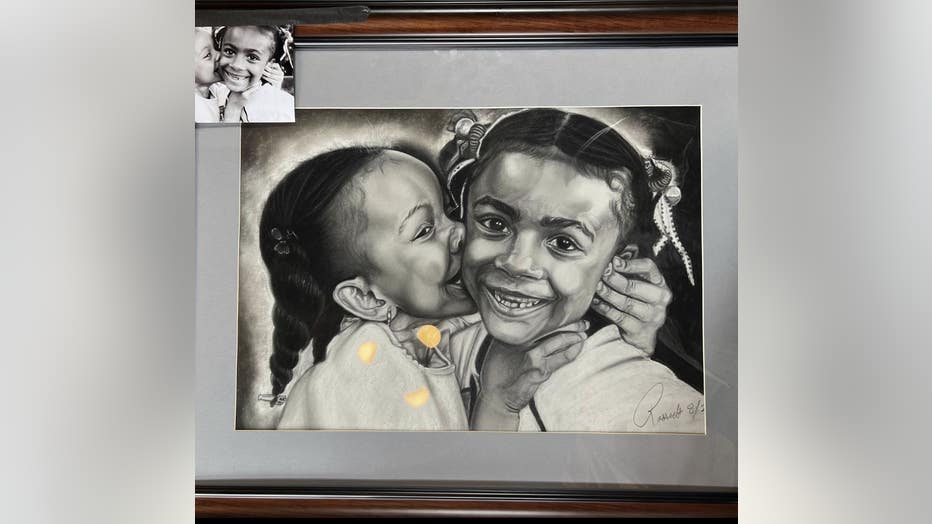