Immediate cuts to Oakland's Head Start program, which helps young children, especially disadvantaged ones, learn, were avoided thanks to funding identified by the City Council Wednesday.

OAKLAND, Calif. - Head Start is currently shut down at the Tassafaronga Recreation Center in the heart of East Oakland.

It is one of three head start programs in low-income Oakland neighborhoods that have closed because of a lack of funding.

"I'm incensed by the closures that are being recommended in some of the neediest places in the city," said Oakland City Councilwoman Carroll Fife.

Neighborhood activists and elected officials protested outside the rec center Wednesday urging the city to find the money to keep the programs running. 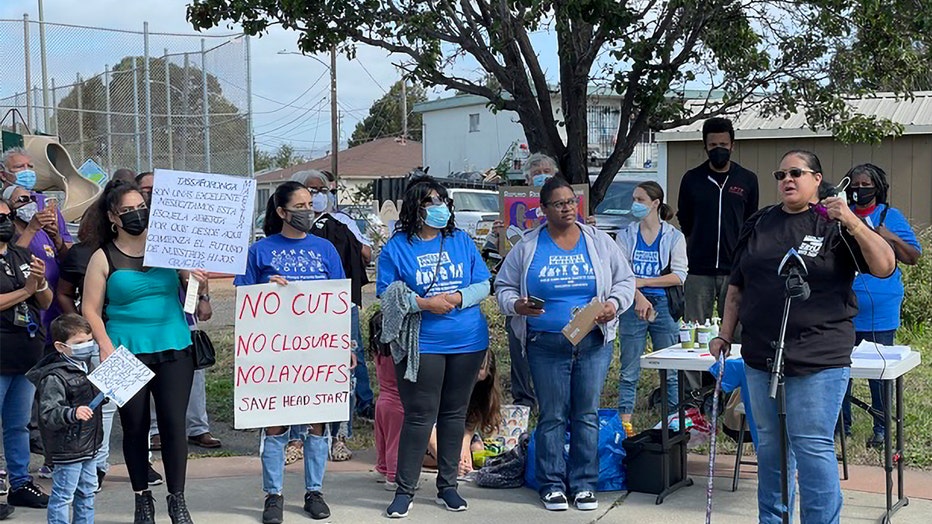 Oakland Head Start workers, community groups and elected leaders at a press conference in Oakland, Calif., on September 1, 2021 to demand no cuts, layoffs or closures to the Head Start program. (Photo courtesy The Worker Agency/Zach Goldman)

"Early education is so much more than ABCs. It is a matter of brain development from zero to five. Their educational future really rests in the hands of these providers," said Clarissa Doutherd of Parent Voices Oakland.

The city council met Wednesday to discuss finding $1.8 million to reopen the sites for 52 pre-school-aged children.

"We don't want any closures, any cuts, or any layoffs. So it will be an ongoing process to figure out how we can make that happen," said Fife.

Oakland received about $12 million a year in federal grants for head start for the next five years.  That is $5 million a year less than it had anticipated.

Immediate cuts to Oakland's Head Start program, which helps young children, especially disadvantaged ones, learn, were avoided thanks to funding identified by the City Council Wednesday.

But Oakland officials say they don't need the entire $5 million to reopen the closed sites.

Head Start also provides meals and other services for families in the greatest need.

"Unfortunately, that is being faced with closure are in areas that have the greatest disparities, the greatest inequities, and the most critical needs. We need to show up for children and families," says Oakland City Councilwoman Treva Reid.

City Council members say they are going to have to come up with a long-term funding plan, well beyond this year, to keep the head start program fully functioning in Oakland.