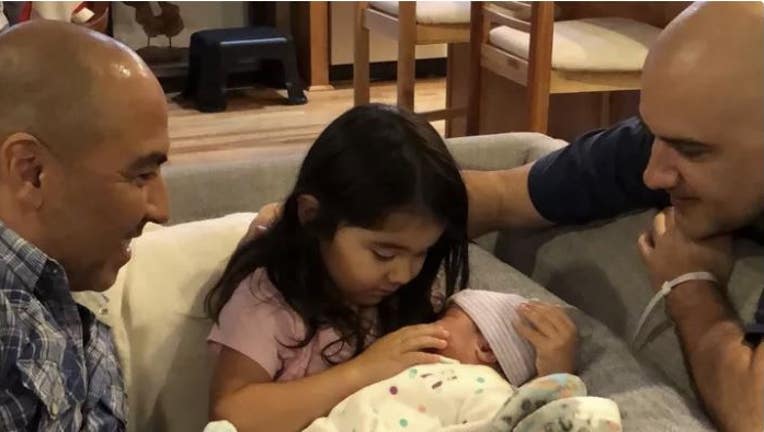 A GoFundMe campaign has been set up for an Oakland family following a shooting on Oct. 30, 2021 during which a father was injured as he held his 5-week-old baby.  (Courtesy of GoFundMe.com/crime-against-the-chavezlopez-family)

OAKLAND, Calif. - There has been an outpouring of community love and support for an Oakland family that was shaken to the core last month when gunfire ripped into their home and injured a father holding his newborn.

The shooting happened on Oct. 30 in the 1000 block of Peralta Street, as the family was getting ready to sit down for dinner.

A bullet hit Marco Chavez-Lopez in the face. He was holding his 5-week-old infant in his arms. Also home at the time was his husband, Jimmie Chavez-Lopez, their 4-year-old daughter, as well as a housemate.

Marco Chavez-Lopez was rushed to a hospital and has since undergone the second of what’s expected to be a series of surgeries, according to a GoFundMe set up by friend Chrisa Mott.

The money raised would help the family with expenses including finding a new home, daycare for the children, and medical care for the injured father, Mott said. Donations would also go toward a rental car as gunfire damaged the family vehicle, leaving it in need of repair.

As of Tuesday, more than $74,000 had been raised as part of the fundraising effort.

The days following the shooting have been traumatic and chaotic as the family has sought to establish some stability in the aftermath of the frightening events.

Marco Chavez-Lopez has been released from the hospital and was staying with a friend, a nurse and who can help with his care.

His husband and their two young daughters have been staying at another friend's house.

".[H]e has his hands full with the babies but they are settling in and have great support and a comfortable space to call their own for a while," Mott shared in an update on Sunday.

The update also gave insight into the optimistic approach Marco Chavez-Lopez was taking as the family worked toward healing.

Mott shared a text from Marco Chavez-Lopez earlier that day, in which he wrote: "’Best best rest all week. Best nursing all week. Best bed all week. Best day all week. I love waking up to my nurse coming in to give me stuff and not having to wake up pushing buttons asking for someone to call my nurse. I am well taken care of here. Very comfy.’"

Mott then commented, "As always, Marcos positive attitude of gratitude is helping him through the roughest times."

As anyone would expect, the traumatic event has been extremely difficult for the Chavez-Lopezes’ older daughter.

"As we hit one week since this horrific incident, reality is settling in for the 4-year old," it said in the update. "She is scared and she doesn't want to see daddy because his face is hurt. Jimmie is doing the best he can with this situation and knows that she will be ok but also knows that help with her healing is necessary."

Mott said that the family was working toward getting the child into therapy to offer her support in the healing process.

There have been no arrests in the case. On Tuesday, Oakland police told KTVU that the investigation was ongoing with no new information to release at this time.

Investigators have said that there were two ShotSpotter activations associated with the incident. Police urged anyone with information about the case to contact the department's Felony Assault Unit at (510) 238-3426.

While the Chavez-Lopezes hoped to receive some answers soon, they stressed that their primary focus was on the well-being of the family. There was also an abundance of gratitude for those who have offered love, help and support during this time.

"As one would imagine, this event was traumatic for the whole family… Jimmie is now working to put the pieces of his life and family together," the GoFundMe said, noting, "This amazing family is loved by so many, the outpouring of support has been tremendous."