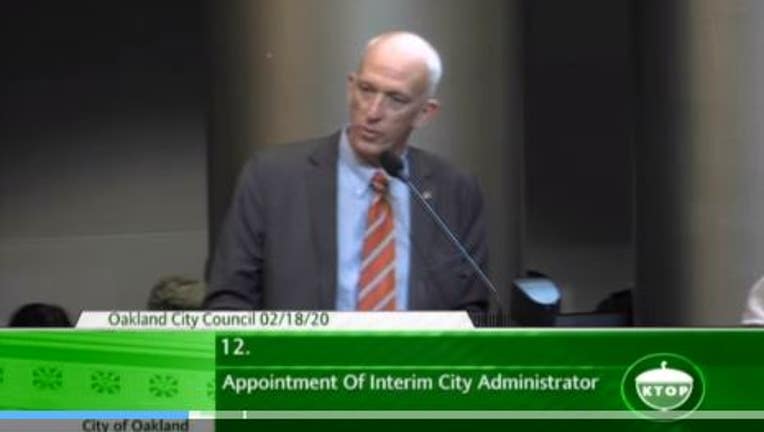 OAKLAND, Calif. - The Oakland City Council voted Tuesday to approve an interim city administrator — a man who resigned as Lafayette city manager over the community's refusal to build more housing and who recently worked in Richmond, hiring that city's first African-American police chief.

Steven Falk was confirmed by a unanimous vote. He was Mayor Libby Schaaf's pick.

His appointment comes after Sabrina Landreth, the current city administrator, announced she would be stepping down from her position in March.

Falk's post will run from March 12 to July 10, or upon the appointment of a permanent city manager.

Falk has 32 years of experience in municipal government. He told the Oakland council that he began his career in 1986 and has led the cities of Long Beach, San Francisco, Lafayette and Richmond. Last year, he hired Bisa French as the city's police chief. And last week, Falk was featured in a New York Times article about the push to build in California, and how he ultimately left that wealthy suburb over the resistance against building more housing - something that Oakland and Schaaf have been pushing for.

At the meeting, Falk called the job of being a city administrator as "very interesting. Every day is a different day."

Falk added: "I bring a strong sense of integrity."

From his staff, he said: "All I expect from you is excellence."

And as for his attitude? "I'm relentlessly optimistic. Sometimes to the point of being annoying."

One man in the audience said he had nothing against Falk, but criticized the fact that he would be earning $25,000 a month, when he thought the city should elevate someone already at City Hall. Another woman said she thought Falk deserved the money if he could change the dynamics and what she described as corruption and coverups in Oakland.