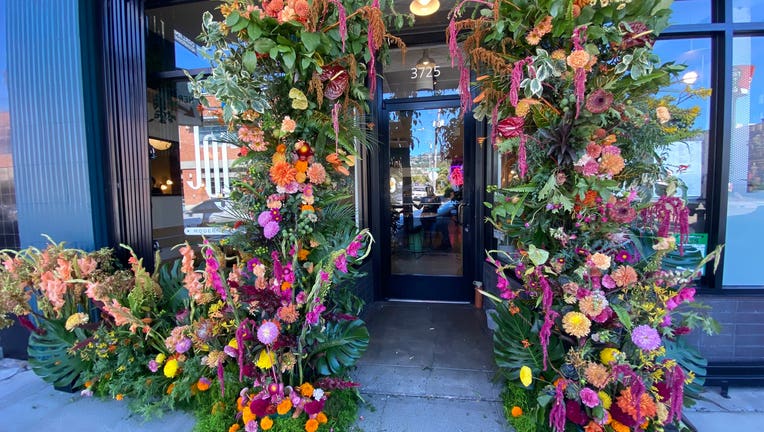 It took Kai Garcia some five hours to put up a massive floral arrangement outside Jo's Modern Thai on July 23, 2022.  (Kai Garcia)

OAKLAND, Calif. - An Oakland woman has been receiving a lot of love and attention for a stunning, life-size floral installation she created at the restaurant where she worked.

Kai Garcia, 33, designed the massive arrangement outside Jo’s Modern Thai on MacArthur Boulevard. It went up on Saturday to mark the establishment's first anniversary of opening.

It took five hours to put up and almost a week of planning, as well as help from her daughter and friends. Made from 100% fresh flowers, the huge eye-catching and colorful arrangement adorned the entryway of the restaurant.

"No one is doing anything spectacular with flowers in the East Bay right now, so I decided to try to do it myself," Garcia shared with KTVU. "Flowers have always been my true passion and love!" she added.

The artist, who described herself as "a proud Bay Area native" and mother, was also the bar manager at Jo’s.

The restaurant job has allowed her to live out her passion, and offered her a platform on which she could publicly share her work. It’s also helped her build her confidence in working toward making that passion a career.

"So when we first opened Jo’s a year ago, I started doing weekly floral arrangements for our window display and dining room," Garcia shared, adding. "Having that consistency of doing arrangements and getting such positive feedback from guests and coworkers and friends really was what pushed me to see that I could actually make this a career."

Garcia said putting her work on display and then sharing images of her arrangements on social media have also led to an organic growth of clientele. 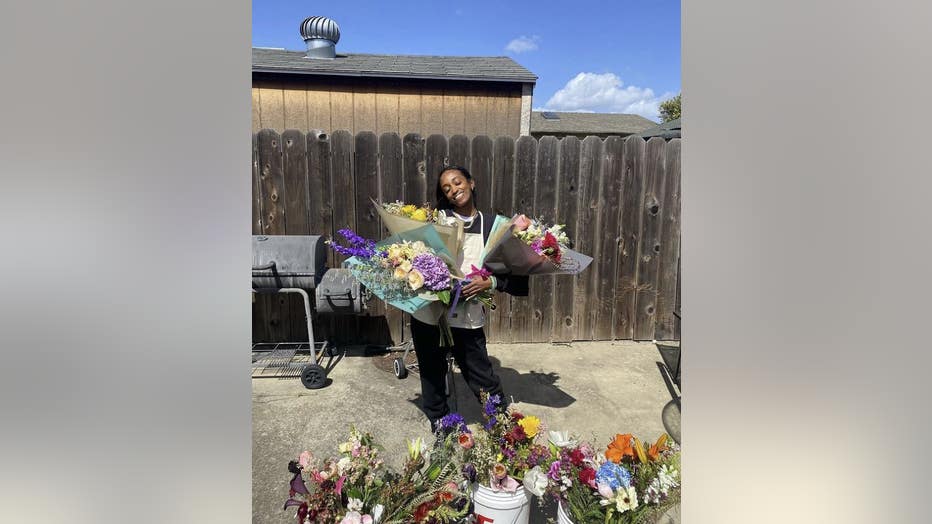 East Bay florist Kay Garcia said she's living out her dream as she sought to bring joy to people through her floral art.  (@ the.bloomingaesthetics/Instagram )

"I’ve been getting soooo much love and support from the community and strangers that see my work that I couldn’t help but want to learn more about flowers and plants and techniques and tools of the industry, and just be better," she said. "Eventually, people just started asking how much the bouquets would cost to buy and if I could do arrangements for people in general," the florist explained.

While Garcia said that she’s not been able to turn a profit yet, as she’s still working on making a career out of this beloved hobby, the work she’s put in has paid off in other incredibly meaningful ways. 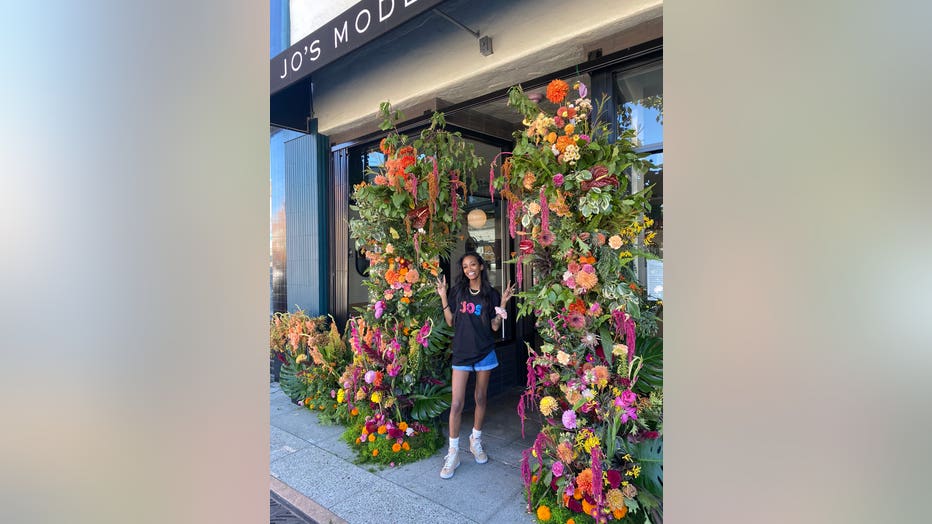 Florist Kai Garcia has received a lot of attention and praise for a massive floral installation outside Jo's Modern Thai to mark the restaurant's first anniversary on Saturday, July 23, 2022.  (Kai Garcia)

Since Garcia put up the installation at Jo's, people have been stopping by both on foot and by car and taking photos of the arrangement. "They’re drawn to this beautiful piece of living art! Which is really just my dream come true!" the floral artist said.

The love has been pouring in on social media too. She posted photos of her latest piece, prompting praise and inquiries from more potential customers.

She's riding this wave of positivity and planned to take advantage of this wonderful chance to build on her dreams.

"I don’t want to fumble such an opportunity as this by doubting myself, or fearing failure, or worrying about IF I can be a florist by trade. So I’m just doing it!" Garcia shared.

She said he's been very fortunate to be able to work out of her garage, but the next step was to find a location for her own shop. "The Blooming Aesthetics" brick and mortar location she hoped, would be coming soon.

For those who want to check out Garcia's latest creation, she said the live arrangement would likely stay fresh enough to stay up until mid-week.

Meanwhile, the East Bay native was celebrating this moment as she made sure to give a big shout-out to her roots, because as anyone who has worked with plants knows, roots matter.

"I'm just a self-taught, hard-working, very-determined mom with a dream of making a name for myself in the flower industry," Garcia shared, adding, "From East Oakland to the top of the world! This is just the beginning."