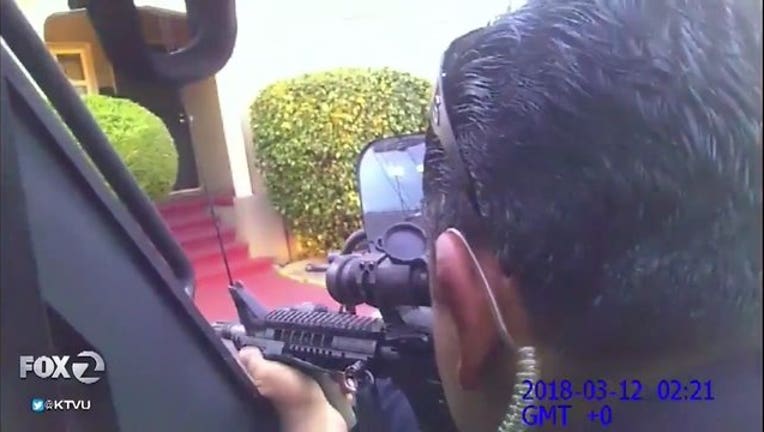 OAKLAND, Calif. (KTVU) - Five Oakland police officers filed a lawsuit in Alameda Superior Court on Monday alleging that the city and Police Commission are overstepping their bounds and don't have the power to fire them.

These officers were exonerated by six separate investigations following the deadly March 2018 officer-involved shooting of Joshua Pawlik - a homeless man who lay sleeping with a gun in his hand.

And in all those investigations, the officers were told that their use of force was lawful, according to a statement by their attorney, Harry Stern, partner in the law firm Rains Lucia Stern St. Phalle & Silver.

He is representing Francisco Negrete, William Berger, Brandon Hraiz, Craig Tanaka and Josef Phillips. All have received termination notices by the chief of police and are on administrative leave.

"The court action filed today is a demand for justice," Stern said in a statement. "The City of Oakland and its Police Commission abandoned their own rules to unjustly terminate these fine officers. These officers' response to a citizen's call for help regarding an armed suspect in a residential neighborhood was admirable, reasonable and lawful. Their actions have been fully investigated and unanimously exonerated after over a year of review. The Police Commission ignored the findings of multiple investigations, including their own, and in a blatant display of bias, trampled these officers' rights by unjustly firing them for merely doing their duty. We are going to court to right this wrong."

Added Oakland Police Officers' Association President Barry Donelan: "These officers were investigated, exonerated and then unjustly fired.  It is disappointing that these officers have to go to court to force our employer to follow its own rules and do the right thing."

Police Commission chair Regina Jackson was not immediately available for comment on Monday. Neither was the city attorney's office.

The lawsuit alleges that the Police Commission does not have jurisdiction in this case, as per the city charter. That's because, according to the suit, the commission only has the right to terminate if its own investigative agency and the chief of police disagree, which they did not in this case.

Plus, the lawsuit contends, the Police Commission cannot rely on the federal monitor's opinion in making its own finding.

Despite those six investigations, though, two powerful bodies with authority to discipline and even fire police officers found that the officer behavior on the night Pawlik was killed to be unacceptable.

In July, federal monitor Robert Warshaw and the Oakland Police Commission both  recommended terminating the officers for what they deemed as excessive use of force.

Warshaw called the police chief's acceptance of the investigations "disappointing and myopic," adding that investigators took the officers' words at face value and did not dig any deeper. Warshaw said that because Pawlik was unconscious or sleeping at the scene, he did not pose an "immediate threat" to police, as they had claimed. Warshaw also said that when Pawlik woke, he moved "minimally....He was a live human being and any reasonable officer should not have expected him to remain perfectly still."

The Oakland Police Commission later unanimously rejected the findings by its own investigative body, the Community Police Review Agency, which exonerated the officers, calling that investigation "tainted." Her committee last month recommended firing all of the officers, saying that a video they watched of an officer's body camera showed that a police light shining in the sleeping homeless man's face as if to confuse him was the defining moment in helping them make their decision.

The police officers' lawyers also put together an interesting behind-the-scenes timeline of what happened at their jobs following Pawlik's death.

Almost a year after Pawlik was killed in March of 2018, the five officers were placed on administrative leave on March 12. They were also suspended of their peace officer powers and their access was restricted within the department to private citizen.

On June 11, the officers' lawyers sent the chief a letter demanding their immediate reinstatement. The following day, the chief responded that she was "recused from this matter" and should not be included in any further communication regarding this shooting.

Chief Anne Kirkpatrick then stated she had forwarded the letter to "Chief Warshaw" and the city attorney's office. Again, the police officers tried to get their jobs back on June 28, but their request has been unanswered, the lawyers wrote in the suit.

On July 11, each of the officers got a letter signed by Kirkpatrick saying the city "intends to terminate" their employment as a result of the Police Commission's determination that their conduct was "out of compliance" and in violation of department rules. They were told they could schedule a Skelly hearing to counter the claims. So far, those hearings have not occurred.