Tear gas causes a fire on top of 801 Franklin Street in Oakland on June 1, 2020. Chip Minnick captured some of what it looked like. He and his son are heard swearing on this video.

OAKLAND, Calif. - Oakland police lobbed tear gas canisters that fell on the balconies of residents and set their condominium's community garden ablaze during a George Floyd rally last summer, but it's likely officers didn't know about these events and the chief never specifically apologized to the people living in this downtown highrise, residents said in interviews this week.

The fire and gassing occurred at the end of a youth-led protest on June 1, 2020. Police now acknowledge they falsely claimed some of the protesters were preparing Molotov cocktails and they had to respond with tear gas and non-lethal munitions.

A year and a day later, Chief LeRonne Armstrong apologized to the community, especially to Oakland's youth, saying the officers' actions were improper and he issued nearly three dozen disciplinary actions. Armstrong admitted there were no Molotov cocktails and no imminent threat to police or to the public that day.

But what hasn't been widely shared until now, is that some of the canisters thrown into the crowd of protesters ended up gassing a group of residents who happened to live nearby but were not participating in the rally at all.

The condominium dwellers of 801 Franklin Street were both witnesses and unwitting victims of this event, explained Danny Iland, one of the building's residents.

"The tear gas canisters were fired indiscriminately upwards, landing on multiple nearby buildings, tear-gassing me and other residents," he told KTVU.

Oakland condo dwellers at 801 Franklin Street want an apology from police for tear gas lobbed onto their balconies and garden last summer.

Video provided to KTVU by another neighbor shows that the tear gas canisters ultimately set fire to a community garden and one of the elderly residents had to be helped down off the rooftop to avoid being gassed.

Iland wanted to know: Was this tear-gassing of the neighborhood residents who were not even involved in the protest and the destruction of the garden mentioned in the disciplinary action?

"As far as I know," he said, "the building was never compensated for the destruction of our landscaping and the residents were never contacted with any apology or anything."

Iland contacted KTVU shortly after the chief made a public apology, wanting to share specifics about what happened to the people in his building.

However, it is unclear if Armstrong even knew what happened at 801 Franklin Street. Oakland police spokeswoman Johnna Watson on Wednesday said she would look into the matter and follow up on this question. She had not by the afternoon deadline.

Architect Chip Minnick, his wife, and his 12-year-old son decided not to go down the protest that day because it fell during the height of the coronavirus pandemic.

Instead, he opted to watch, chant and film from his 14th-floor condominium.

In newly obtained video, Minnick's footage shows what appears to be tear gas canisters getting lobbed onto the second-floor open-air garden, where some people were watching the protest and exercising.

The video shows the smoke and loud pops.

"What is that Dad?" his son is hearing asking.

Then, flames erupt from a small patch of grass in the community garden.

Then, the son screams in general to the police down below: "F--- you guys. F--- the cops. You're burning our building. Our building's on fire because of you stupid a--holes."

Minnick's video also shows a neighbor hosing down the grass and other neighbors walking an elderly resident away from the smoky scene.

Neither Iland or Minnick want to overplay their situation or suffering.

They did inhale a bit of tear gas, but they do not want to compare what happened to them with the dozens of on-the-ground protesters who were bruised by the equivalent of rubber bullets or had breathing difficulties from the gas. Oakland is facing two federal lawsuits over these injuries.

However, both want what occurred to them and their neighbors acknowledged.

And they want police to know that when they fire noxious fumes into a crowd, there are after-effects, even if they are unintended.

Minnick said that he and his entire family felt very angry and caused him to feel an even deeper distrust in police.

"Their narrative was just BS," he said. 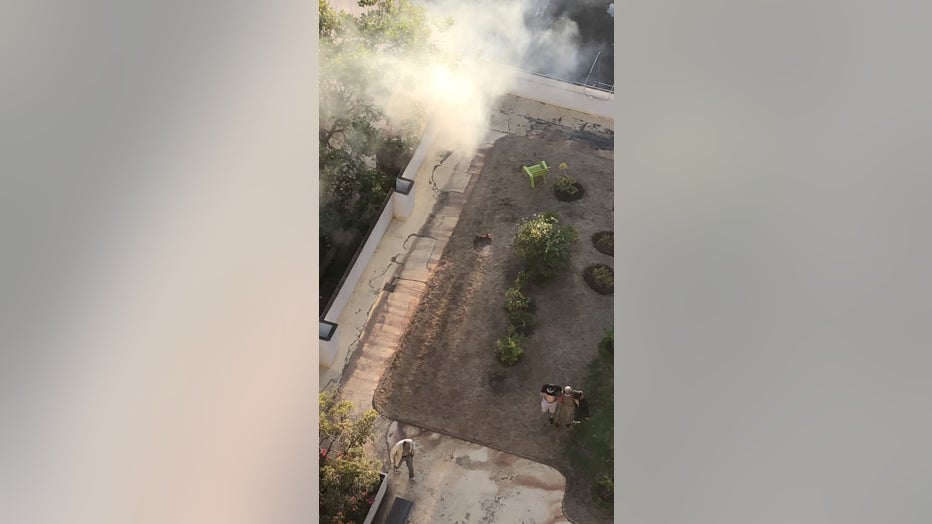 An elderly woman leaves the rooftop garden because of tear gas at 801 Franklin Street in Oakland on June 1, 2020. Screen grab: Chip Minnick 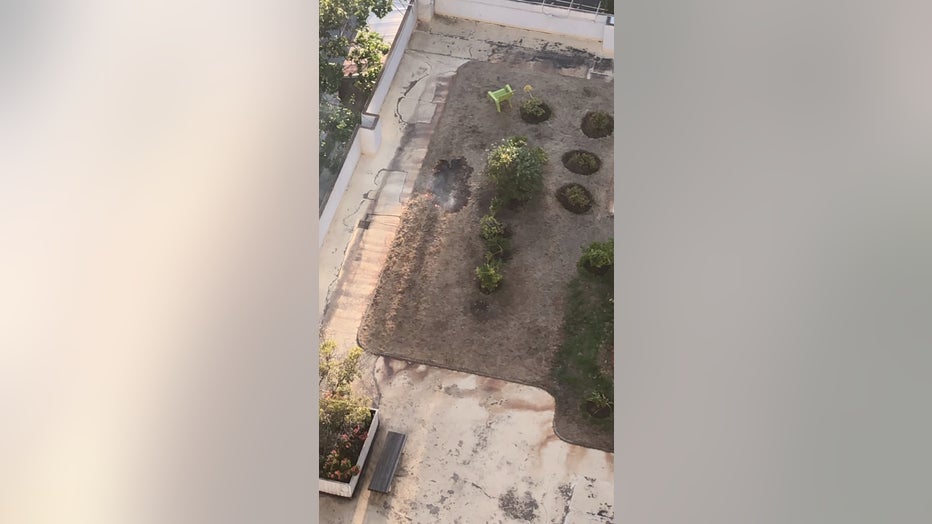 The rooftop garden is set on fire by tear gas at 801 Franklin Street in Oakland on June 1, 2020. Screen grab: Chip Minnick 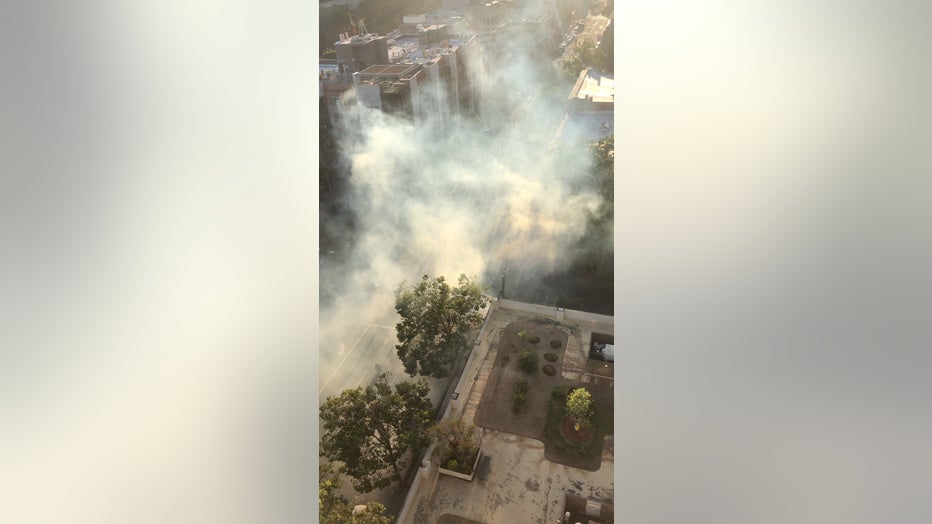 A cloud of tear gas over 801 Franklin Street in Oakland on June 1, 2020. Screen grab: Chip Minnick 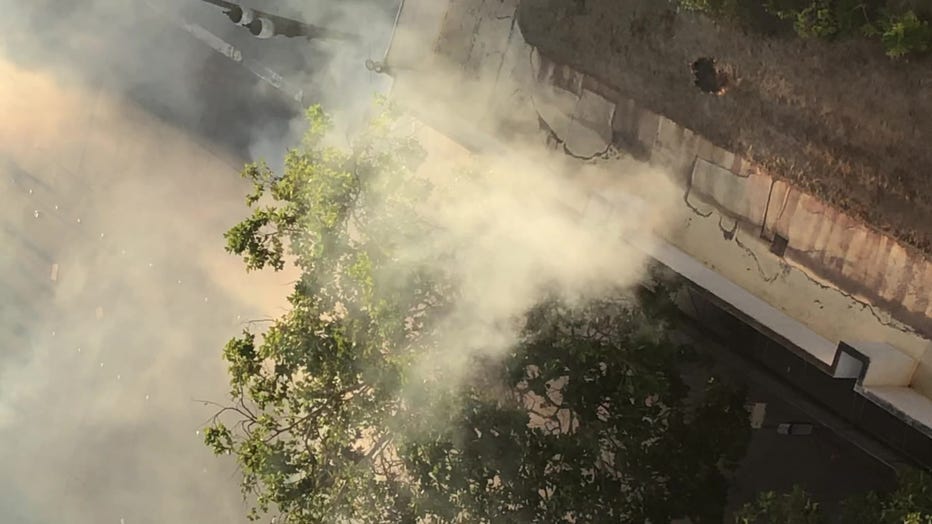 An aerial view of the tear gas smoke at 801 Franklin Street in Oakland on June 1, 2020. Screen grab: Chip Minnick 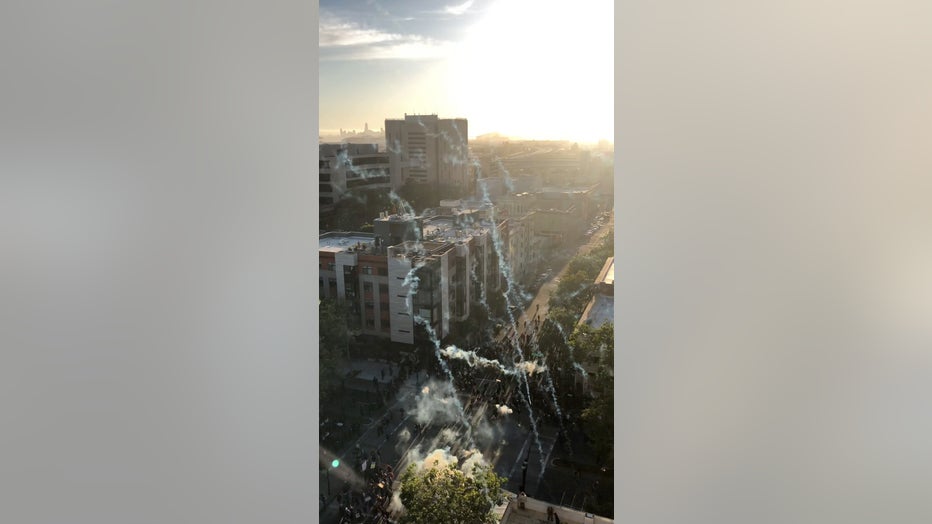