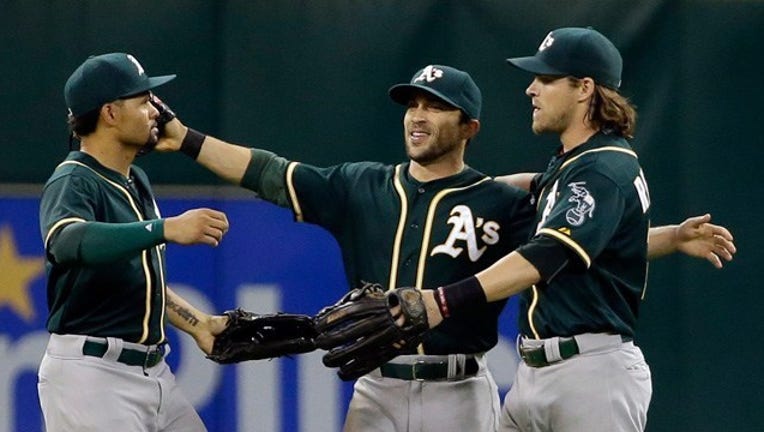 HOUSTON (AP) — The Oakland Athletics finally got the performance they have needed out of their bullpen and did something they have struggled at this season — win a one-run game.

Brett Lawrie hit a tiebreaking RBI single in the sixth, and the Oakland bullpen combined for 4 2-3 scoreless innings as the Athletics snapped a four-game losing streak with a 2-1 victory over the Houston Astros on Monday night.

"We need a few of them," Oakland manager Bob Melvin said of the one-run win. "It's not going to exorcise all the demons but it certainly gives a night where we can sleep better."

Lawrie's hit came off Will Harris who came on in relief of Joe Thatcher (0-1), who gave up an infield single and two walks to load the bases with no outs.

Edward Mujica (2-1) went 1 2-3 innings for the win, Evan Scribner threw two innings and Tyler Clippard pitched the ninth for his fourth save.

The Athletics' bullpen entered the game 2-12 with a 4.78 ERA this season and had converted just four of 12 save opportunities.

"We made some big defensive plays when we needed to that we haven't been making," Clippard said. "We won a one-run game. Everything that we hadn't been doing, we did tonight. We proved to ourselves that we can do it, and that was exactly what we needed."

Harris escaped further damage in the sixth, getting Sam Fuld to ground back to the pitcher for a force at home and then Eric Sogard to hit into a double play.

Oakland starter Drew Pomeranz left the game in the fifth inning with left shoulder tightness. After throwing a pitch and then backing off the mound, Melvin went out to the mound with the trainer, and Pomeranz was taken out. He went 4 1-3 innings, giving up one run and two hits with five walks and two strikeouts.

"My AC joint got a little flared up after that long inning," Pomeranz said. "It just didn't go away. It just kept bothering me during the start. I guess when (Melvin) came out, he saw it was bothering me. He took me out before it got worse."

Evan Gattis' sacrifice fly scored Jose Altuve to give Houston a 1-0 lead in the first, but Sogard's RBI single in the second tied it.

"We just couldn't really break through with any sort of momentum," Houston manager A.J. Hinch said. "We had some opportunities, we just didn't have the knockout punch."

George Springer sent a deep drive to center in the eighth, but Fuld made a catch running up Tal's Hill.

Lance McCullers of the Astros allowed one run and three hits with five strikeouts but walked three in 4 2-3 innings in his first career start.

"I felt relaxed and in a pretty good state of mind," McCullers said. "I was just focusing more on being happy and relaxed and understanding that less is more in those early innings."

Athletics: 2B Ben Zobrist, on the 15-day DL with a knee injury, is scheduled to make a rehabilitation start and play five innings for Triple-A Stockton on Tuesday. Melvin said Zobrist will do some base running before the game as part of his rehab. "He feels great as it is right now," Melvin said. "They've been taking him through rigors more so than what he's going to have to deal with in a game. He was sliding (Sunday). He's been tweaking his sliding a little bit so he doesn't have to slide on that knee, on that spot."

Astros: Houston placed RHP Samuel Deduno (lower back strain) on the 15-day DL retroactive to May 14 and transferred SS Jed Lowrie (thumb surgery) to the 60-day DL. Hinch said Deduno's injury isn't serious but that he needed a few games to deal with it. "We hope it's not going to disrupt too deep into the season," Hinch said. "But he'll be shut down from throwing for a couple of days to calm his back down and then we'll get him back up and running again."

Athletics: RHP Sonny Gray (4-1) will be looking to bounce back from his first loss of the season, a 2-0 loss to Boston on Wednesday. Gray leads the AL with a 1.61 ERA.

Astros: RHP Roberto Hernandez (1-3) has gone at least six innings in each of his last six starts.