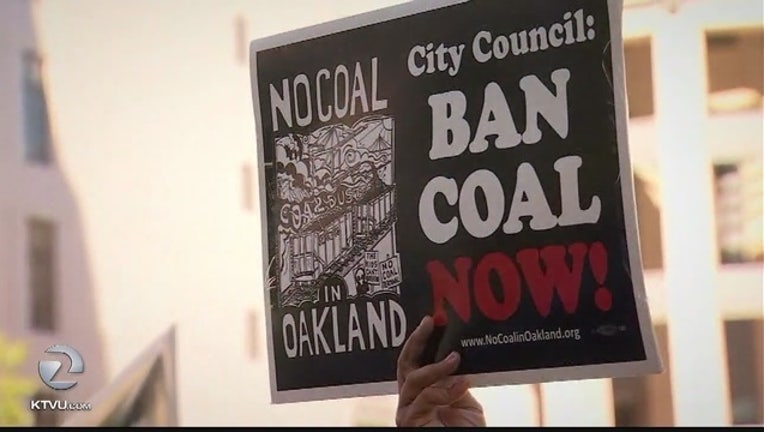 OAKLAND, Calif. (BCN/KTVU) - A handful of Oakland youth groups will cross the bay Friday afternoon for a rally in front of the San Francisco office of the Bank of Montreal, which they say is helping fund a coal terminal project in West Oakland.

The middle and high school students with Youth Vs Apocalypse, Warriors for Justice and West Oakland Legacy and Leadership at Attitudinal Healing Connection plan to gather at the bank's One Market Plaza office to ask that it pull its finances from the project.

"It's because of how the Bank of Montreal is funding Phil Tagami's coal terminal in West Oakland," said 11-year-old Christopher Soriano of Warriors for Justice. "I just want to fight for the people of West Oakland."

The kids plan to jump on BART after school and head into San Francisco, chanting and singing along the way in order to let riders know their objections to the coal terminal project.

"If that coal terminal gets built in West Oakland, that means that more people are at risk for getting an asthma attack," Soriano said.

The city of Oakland has also been fighting the project, which could bring up to 5 million metric tons of coal per year through a planned maritime terminal with a rail connection at the former Oakland Army Base. In 2016, the city council passed an ordinance banning the storage and handling of coal but project developers successfully sued the city in federal court.

The city has appealed the judge's ruling in that case, which is still ongoing.

The Oakland students want people to know they're aware of what's going on in their communities and they plan to do whatever they can to stop this particular project.

"We're actually trying to do something," said 11-year-old Santiago Preciado-Cruz of Warriors for Justice.

"We're not just a school club that's ... just talking about it."

An adult advisor to the youth groups said the kids are tireless in their efforts to make their communities a better place by fighting climate change, among other things.

"It's totally inspiring to be around them," said Carolyn Norr of 350 Bay Area, a nonprofit working to combat climate change.

"They are absolutely dedicated." An attorney for the project declined to comment, citing ongoing litigation.

A spokesman for the Bank of Montreal did not respond to requests for comment.