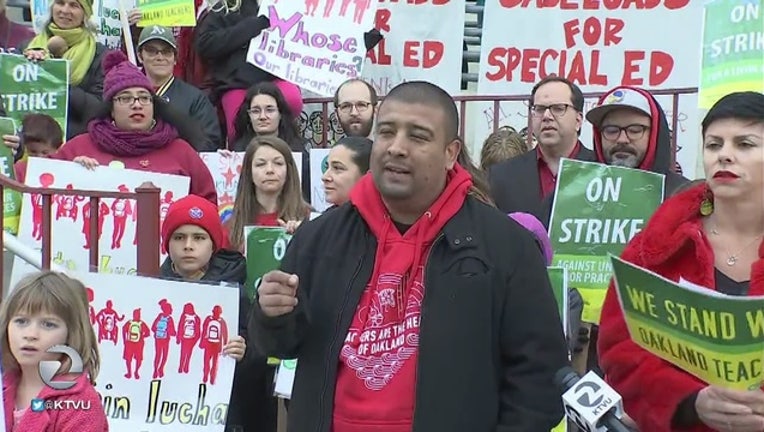 OAKLAND, Calif. - Teachers in Oakland have approved a new contract agreement that ends their seven-day strike and puts them back in classrooms Monday.

Teachers approved an 11 percent salary hike over four years with a one-time 3 percent bonus in a vote Sunday.

“We look forward to being in our classrooms again after having to strike to bring our Oakland students some of the resources and supports they should have had in the first place,” said Oakland Education Association President Keith Brown.

The Oakland Unified School District and the Oakland Education Association, which represents 3,000 teachers, nurses, counselors and other staff, announced the new agreement Friday afternoon and cast votes at the Paramount Theatre in downtown Oakland over several hours Sunday afternoon.

Some picketers outside held signs urging teachers to vote no on the proposed contract.

About 70 percent of the union’s membership cast votes on the contract.

The school district said in a statement that the agreement "is a big win for our teachers, students and community."

In addition to the salary increase, the agreement calls for a reduction in class sizes and smaller caseloads for school counselors for the 2020-21 school years. Caseloads for speech therapists, psychologists and resource specialists will also be reduced and school nurse salaries increased.

The new contract also halts a plan to close up to 24 of the district’s 86 schools, mostly in African American and Latin neighborhoods. Teachers agreed to a five-month pause on school closures and consolidations, and more community input into the process.

The teachers' strike began Feb. 21 after two years of failed negotiations between the union and the school district.

The teachers' union initially sought a 12 percent pay raise over three years. The district initially offered a 7 percent over four years, and a 1.5 percent bonus, but gradually increased its offer over the last two weeks.

“This victory, accomplished through our collective strength on the picket lines with Oakland parents and students, sends the message that educators will no longer let this school district starve our neighborhood schools of resources, “Brown said. “Our fight is not over, though. Oakland educators spoke clearly today at our ratification vote that this agreement will not be the end of our struggle, and we will continue to fight in Oakland and Sacramento for the schools our students deserve.”