OAKLAND, Calif - A teenage musician attending the Oakland School for the Arts (OSA) was among a handful of students highlighted in a nationwide virtual event over the weekend to celebrate the 3 million high school seniors in the U.S. who won’t be able to walk across the stage for graduation due to coronavirus restrictions.

It was Justin Walton’s talents as a musician that caught the attention of those involved in producing Saturday's multimedia event, Graduate Together: America Honors the High School Class of 2020.

Justin Walton, a high school senior at Oakland School for the Arts was highlighted during Graduate Together: America Honors the High School Class of 2020, which aired on May 16, 2020. (Graduate Together 2020)

"When quarantine and online school first started I wrote a rap on how I felt about being on quarantine, missing out on graduation and senior activities,” Walton told KTVU. He then recorded his piece and posted it on his Instagram. He also sent his performance to the official Graduate Together Instagram.

In the video, he made sure to represent his hometown wearing a t-shirt emblazoned with the words “Oakland is proud” and did his thing.

“Been dreaming about this moment since like I was 6,” he rapped. "They call my name, get my diploma  and then pose for a pic.” He goes on to ask, “Who would’ve known my last day of school would’ve been in March? Last day in the classrooms and the busy halls."

People Magazine, which was involved in producing the graduation show, noticed his talents and his words resonated. They contacted Walton the following the day. “...they were telling me how much they liked it and that they wanted to highlight it on their website and social media,” Walton recalled. They also encouraged the teen to submit a video about himself to be considered for the upcoming graduation show.

It took only a couple of weeks for producers to let the Oakland teen know that he had been been chosen. "I was extremely honored and excited when I found out," he said. "It's crazy that all of this happened because of my graduation freestyle. I never thought that I would have ended up on TV because of it,” he said. 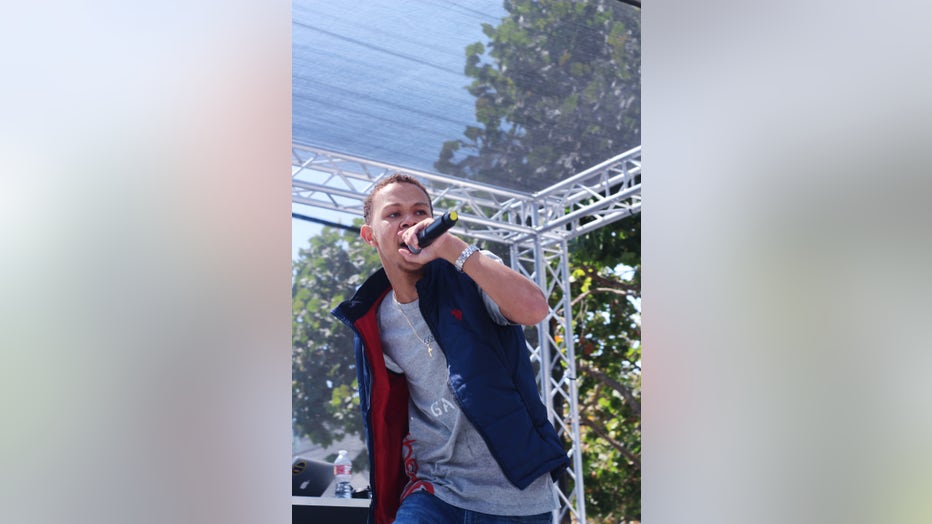 Being in the spotlight was nothing new for the young musician. The rapper, songwriter, and poet said he’s being performing since the age of 8. He’s shared stages with notable artists including Nas, Wu-Tang, Sheila E., Common, E-40, and Mistah Fab, to name a few. And it’s been an incredibly memorable few days for Walton. Last week, he released his debut album titled Yours Truly. For college, he'll be heading East, as he's been accepted to New York University’s acclaimed Clive Davis Institute.

So it may not be a surprise that Walton’s talents clearly stood out. Producers received thousands of video submissions from across the country, according to Stephanie Germeraad, communications director for the XQ Institute, the organization that was the driving force behind the Gradate Together event. The group works to help students rethink the high school experience in an effort to ensure that every student graduates prepared to succeed.

“In 2 weeks, we received more than 5,000 submissions for the show,” Germeraad explained. In all, more than 1,000 were represented in some way, ranging from their photos used in the set background, to being featured as performers or highlighted as speakers, in video vignettes, or as presenters to introduce celebrity speakers.

Bay Area students were heavily featured in the show. Other exceptional students from the region included Brandon Tran, from Valley Christian High School in San Jose, who appeared along with Walton to introduce Rapinoe. Tran is an immigrant and the first person in his family to go to high school. He will be attending the University of Southern California on a scholarship. 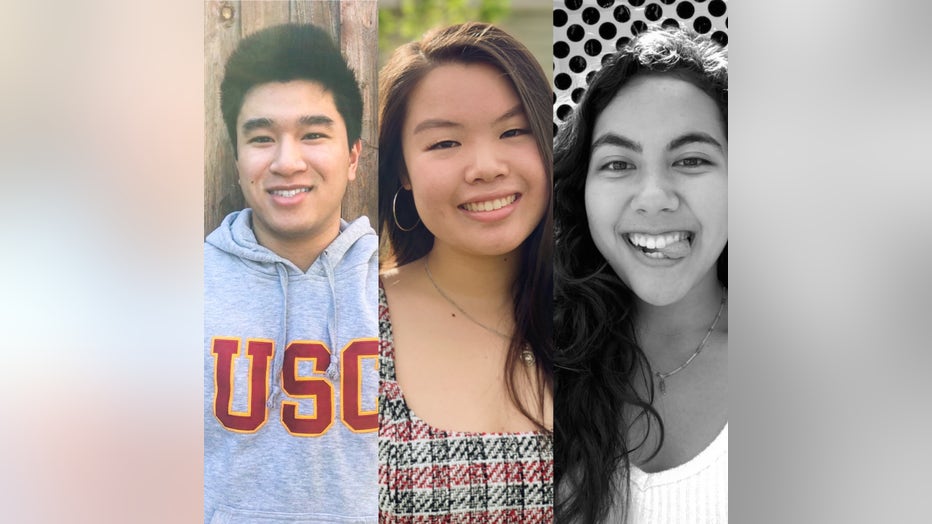 Fellow Oaklander, Emily Liang made an appearance, representing her school, Oakland High. Liang has received many honors in academics and will be the first in her family to go to college when she attends Stanford University in the fall.

Alena Jarrett, from Saratoga High School was also a part of the graduation event. She plans to attend the University of Arts London: London College of Communication to study Contemporary Media Cultures.

The idea for the show came about six weeks ago in response to a conversation XQ had with the co-founder of one of its partner schools, The Washington Leadership Academy in Washington, D.C. "They were supposed to graduate their first class of seniors this June and were heartbroken that they might miss out on such an important moment in their young lives,” Germeraad explained. "And that disappointment mirrored what we were hearing from educators, families, and students around the country.”

So the group reached out to its connections at The Entertainment Industry Foundation to see what they could accomplish together. That’s when LeBron James, The LeBron James Family Foundation and James’s team at SpringHill Entertainment jumped in to also join in the colossal effort to celebrate America's high school seniors.

LeBron James was named host of the graduation show and stars including actor, comedian Kevin Hart were enlisted.

And of course there was the event's commencement speaker, President Barack Obama, who during his address on Saturday challenged graduates to rise to the occasion presented before them. "With all the challenges this country faces right now, nobody can tell you 'no, you're too young to understand' or 'this is how it's always been done,’" the former president said. "Because with so much uncertainty, with everything suddenly up for grabs, this is your generation's world to shape.”

Obama continued, "This pandemic has shaken up the status quo and laid bare a lot of our country's deep-seated problems... It's also pulled the curtain back on another hard truth, something that we all have to eventually accept once our childhood comes to an end. And all those adults that you used to think were in charge and knew what they were doing? Turns out that they don't have all the answers. A lot of them aren't even asking the right questions. So, if the world's going to get better, it's going to be up to you."

Gathered in the living room with his family, including his twin brother, who’s also a graduating senior, Walton was overjoyed and felt empowered by Obama's words. “The fact that he ended up being our commencement speaker was unreal,” he said. "I thought that his speech was very good, and needed to be said,” Walton shared.

For his family, they couldn’t be prouder of his role in this historic event during this moment that has left Walton, his twin brother and the millions of other high school seniors robbed of the traditional events that mark this milestone in their lives. 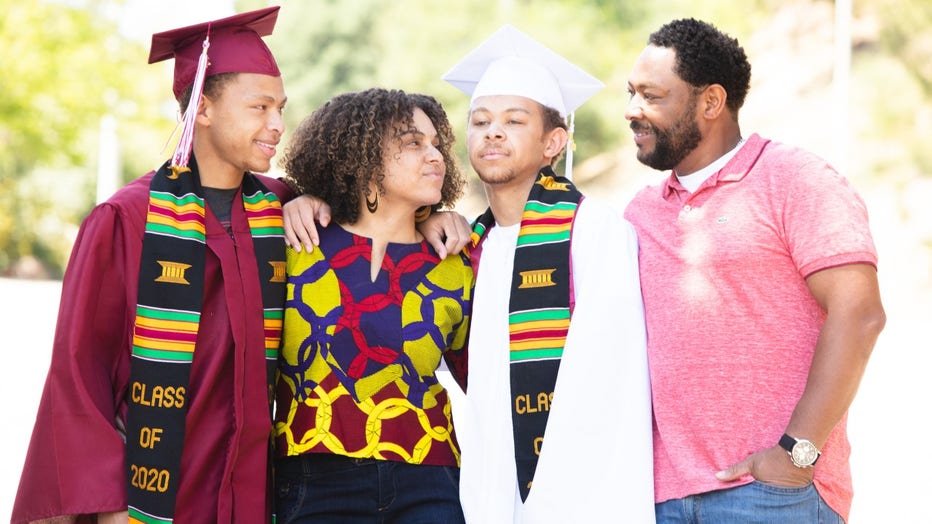 Photos of the graduating Walton twins and their parents were taken on May 15, 2020. (Alexsandra Walton)

"I have been holding in tears over the past few months,” said mom Alexsandra Walton, who is also a high school educator. "I looked at the twins and started to cry. Tears of joy, pride, and sadness that they are going through all of this. Then President Barack Obama came on and I was smiling so much. Like really? President Barack Obama just did your commencement speech!”

President Obama noted that the hardships brought on by this pandemic have meant that many in this generation will have to grow up faster than other generations, as he called on young people to build a community to help manage the difficult times, something Justin Walton has already started to do through his music.

"Due to the situation we are in right now I have definitely experienced sadness, confusion, and anger,” Walton shared, "but I feel blessed that I have been able to use my art and voice to continue to create and help others cope while going through a time where we don’t always have the answers.”

In his graduation rap, he acknowledged that life as we knew it before this pandemic was something that was taken for granted, but his message was one of hope and one that offered perspective: “I know this new way of living isn’t ideal, but this is what we gotta do if we’re trying to heal. You see, it’s bigger than ourselves… The class of 2020 we're gonna make it still."