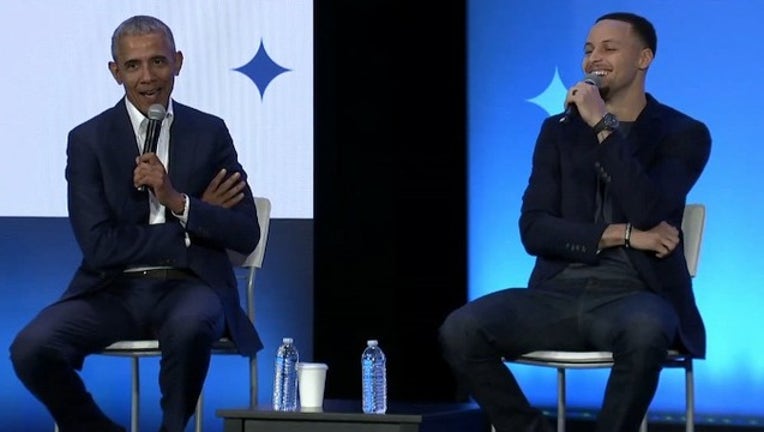 Former President Barack Obama and Warriors star Stephen Curry held a town hall on Tuesday at a three day event in Oakland celebrating the fifth anniversary of the My Brother's Keeper Alliance.

OAKLAND, Calif. (KTVU) - Former President Barack Obama teamed with Warriors star Stephen Curry on Tuesday to celebrate the fifth anniversary of the My Brother’s Keeper Alliance with a town hall Q & A at the Scottish Rite Center in Oakland. They touched on a variety of topics, including the notion that flashy necklaces and provocative dancing within the hip hop community isn’t always what it seems.

“If you’re confident about your sexuality, you don’t have to have eight women around you twerkin’,” Obama said, addressing the vision of a man surrounded by many women. “You seem stressed, that you got to be acting that way, because I have one woman who I am happy with. And she’s a strong woman.”

MBK, which aims to reduce gun violence and mentor boys and men of color, put on a variety of events spread over three days. The keynote session allowed Obama to masterfully shuffle from topics as sensitive as prison reform to letting an aspiring local musician know that he wanted to listen to his work.

Obama’s principal message was that young men of color have the power to spark change in their communities. He and Curry offered their own youth struggles in front of two rows of young men from around the country. After retracing the power of music in his own adolescence, where he described it as “empowering” and said artists inspired him to work for what he wanted, Obama was asked about masculinity in today’s world.

Alejandro, of Sacramento, said through a microphone that men of color are presented with a “narrow definition of what it is to be a man” from birth. He asked, “How can we begin to change the narrative that is currently forcing us to follow a path that doesn’t align with our identify, including our brothers in the LGBTQ+ community?”

It wasn’t long before Obama, who tagged such a narrative as an “old view,” merged talk of masculinity and hip hop culture, effectively blending two separate questions. When a single person is surrounded by many women it does not automatically mean they’re packed full with confidence and feeling all right on the inside. It does, however, demonstrate how vulnerable a person feels, according to Obama.

Unsurprisingly, the 44th president was able to maintain a relaxed tone throughout discussion. He was clearly comfortable with his company, offering lighthearted jabs at Curry about his injury-prone ankles. When discussing societal pressures surrounding the relationship between one’s bankroll and how they’re respected, Obama unpacked how he sees it.

“Let me tell you this, if you were really confident about your financial situation, you’re not going to be wearing an eight-pound chain around your neck,” he said.

He then touched on racism’s relationship to the topic, specifically how young men get the message they are less than or weak when they fall victim to such abuse. In turn, they may feel like they need to compensate and exaggerate stereotypical traits of young men, which can be devastating. Obama called this a trap that young men must avoid.

“If you’re confident about your strength, you don’t need to show me by putting someone else down, show me how strong you are that you can lift someone else up,” he said.

Problem is, a lot of the pain and violence stems from young men who didn’t have someone teaching them proper respect. In this absence, a dangerous route to seeking respect is possible—like the example Obama used: A youngster who thinks they’ll achieve respect by shooting someone. To achieve respect through aggressive domination is a self-defeating model for being a man, Obama said.

“We have to constantly lift up examples of men who don’t take that approach,” Obama said. “And that’s hard to do in this society.”

When first asked about the role of music in his life, Obama said as a child he was able to identify that the successful musicians all shared a similar truth: They put in hours and hours of work to achieve recognizable greatness. He said that inspired him to mirror their effort. He also offered his MBK’s overarching goal.

“We want to create a space where young men of color, and young men generally, don’t have to feel as if, for me to be respected and admired in my community, I have to act a certain way,” he said.

Obama worked hard because he saw it work for others. He then went on to hold the most important job in the country. There’s obviously a multitude of other factors, but maybe there’s a substantial degree of value in publically aknowledging those who truly demonstrate respect.