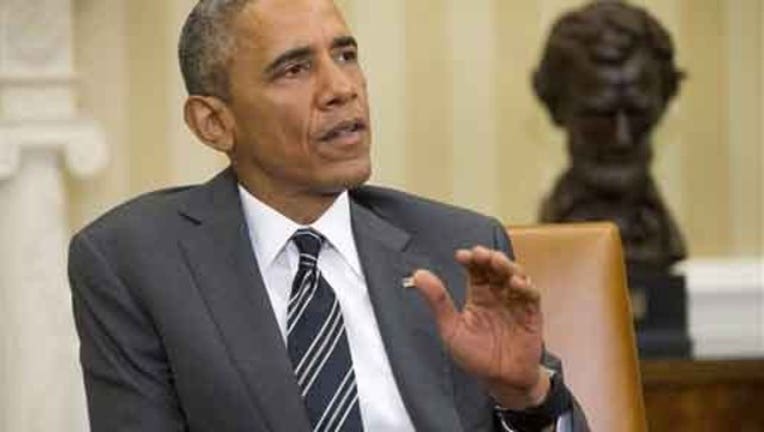 "This needs to get done," he told reporters in the Oval Office. "It's necessary to keep the American people safe and secure."

But with the May 31 deadline fast approaching, there was scant evidence Tuesday of a search for a deal on Capitol Hill. The House and Senate stood in recess for the week, and a House GOP leadership aide said there were no talks happening between the two chambers. The aide spoke on condition of anonymity, because the aide was not authorized to discuss the issue on the record.

Senate Majority Leader Mitch McConnell is calling the Senate back into session on Sunday, May 31, just hours before the midnight deadline, but it's not clear lawmakers will have any new solution.

Back home in Kentucky on Tuesday, McConnell offered no hint of how the impasse might be resolved.

"This is a very big issue that people are divided on. That's what we do. So we're going to work it out in some way and go forward. But there are deep differences of opinion," McConnell told reporters after addressing the Elizabethtown Rotary Club. "We've got to figure some way out of this."

The House bill, which passed by a wide bipartisan margin, was just a few votes short in the Senate Friday, and House Republicans appear content to hold off on a search for compromise in hopes that pressure will increase on McConnell to accept their bill or see the Patriot Act programs lapse.

McConnell complained that the House bill waters down the bulk collection program that now exists, but acknowledged, "they passed it by a very large margin. So that makes it pretty challenging to extend the law as it is."

"The Senate did not act, and the problem we have now is that those authorities run out at midnight Sunday. I strongly urge the Senate to work through this recess to make sure they identify a way to get things done," he said.

Obama noted that the controversial bulk phone collections program, which was exposed by National Security Agency contractor Edward Snowden, is reformed in the House bill, which does away with it over six months and instead gives phone companies the responsibility of maintaining phone records that the government can search.

But the legislation also includes other tools used by the FBI, including one that makes it easier to track "lone wolf" terrorism suspects who have no connection to a foreign power, and another that allows the government to eavesdrop on suspects who continuously discard their cellphones.

"Those also are at risk of lapsing, so this needs to get done," Obama said.

Paul was unapologetic Tuesday about his role in defying fellow Kentuckian McConnell, despite criticism that he's used the issue to raise money. Paul sent out fundraising appeals after holding the Senate floor for nearly 11 hours last week in what he billed as a filibuster.

"Most people who know me and have watched my career would say that, if anything, I am very sincere about this issue," Paul said on CBS' "This Morning." ''I think I'm right in line with what the founders would have fought for, and I'm proud of the fight."

As for his relationship with McConnell, who has endorsed his presidential bid, Paul said: "I don't think we need counseling yet."

For his part, McConnell said: "This is not personal. Rand and I have a good relationship. We just have a difference of opinion on this issue. It's not a small issue."