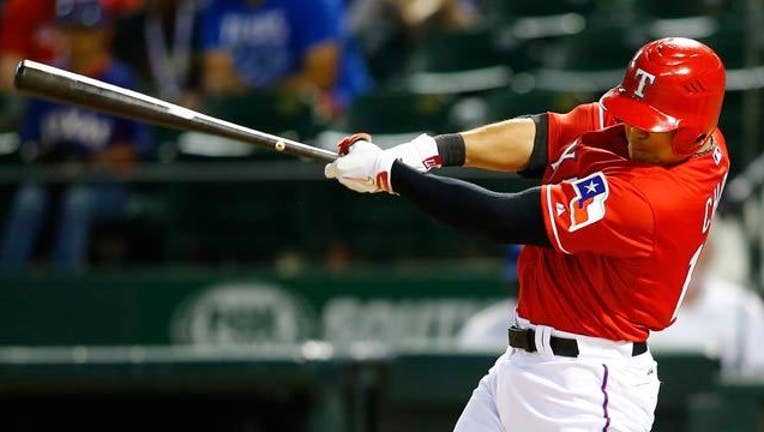 ARLINGTON, Texas (AP) — Shin-Soo Choo regained his hitting touch in a big way and helped the Texas Rangers get a walk-off win for the first time this season.

Choo hit a tying three-run homer in the seventh inning and scored the winning run in the 10th to lift Texas to an 8-7 victory over the Oakland Athletics.

Choo led off the 10th with a double down the right-field line against Ryan Cook (0-2), moved to third following two walks, and scored on Rougned Odor's single off R.J. Alvarez through a drawn-in infield.

When Choo came up in the seventh inning, he was hitting .101, in a 1-for-27 slump and hadn't homered since April 9. Rangers manager Jeff Banister gave him two days off early in the week. The left-handed hitting Choo hit the homer off lefty Fernando Abad.

"I try to think positive every at-bat, every pitch," Choo said. "Keep focused and follow my approach."

The home run barely fell beyond the leap of right fielder Josh Reddick. Choo, representing the tying run with two out, said he wasn't trying for the long ball.

Rookie Keone Kela (1-1) pitched the top of the 10th to earn his first major league win as the Rangers ended a four-game losing streak.

Kyle Blanks was 4 for 4, including his second home run in two games, and three RBIs for the Rangers. He joined the team when his contract was purchased from Triple-A Round Rock on Wednesday to replace Mitch Moreland, who went on the disabled list with an injured left elbow that required surgery.

The A's took a 7-3 lead with a six-run seventh inning. Mark Canha lined a ball past the mound that struck crew-chief Jerry Meals, who was standing to the right of second base on the infield grass, on the left hip. Reddick also had a two-out, three-run homer.

Banister said he went out to talk to Meals to simply give his upset infielders a chance to settle down.

"I'm guessing that nobody feels worse than Jerry in that type of situation," Banister said.

Rangers OF Josh Hamilton, in extended spring training in Arizona, took batting practice Saturday against LHP Matt Harrison and RHP Kohsuke Tomita and shagged balls in the outfield. Hamilton, reacquired from the Los Angeles Angels last Monday, is scheduled to bat in a game next Monday.

The A's recalled OF Billy Burns, who two hits Saturday, and RHP Alvarez, who faced only Odor. They also reacquired OF Alex Hassan from Texas. To make room for Hassan, OF Cody Ross was designated for assignment. Ross appeared in eight games and hit .095.

Athletics: LHP Eric O'Flaherty was placed on the 15-day disabled list with shoulder soreness and returned to the Bay Area to see team doctors. "Gave him some time off, hopefully gave him enough time for it to go away and it did," manager Bob Melvin said. "So, we have to give him some rest."

Athletics: RHP Sonny Gray (3-0) limited the Rangers to one hit over eight innings in Oakland's 8-0 win on opening day.

Rangers: RHP Yovani Gallardo (2-3), who opposed Gray in the season-opener, has not pitched more than six innings in five starts.