Editor's Note: Footage showing the moment 22-year-old James Rayl was shot has been removed from this video.

SIDNEY, Ohio - An Ohio father will not face charges after shooting and killing his daughter’s ex-boyfriend as he broke through their front door.

Surveillance video released by the Shelby County Sheriff’s Office in Sidney, Ohio, shows 22-year-old James Rayl walk up to a home on July 31 and repeatedly bang on the front door, WDTN reports. Voices can be heard in the background telling Rayl that his ex-girlfriend, also 22, did not want to see him and instructing Rayl to go away.

A man’s voice can also be heard warning that he had a gun as Rayl pushes through the front door with his shoulder and shots ring out. Rayl was shot three times and stumbled into the driveway before collapsing on the ground.

A neighbor appears in the video shortly after and says "he’s dead" and "he’s shot" before law enforcement arrives. Authorities said Rayl died at the scene.

According to FOX News, the man’s daughter had ended her relationship with Rayl more than 18 months ago. Rayl reportedly left a voice mail on her phone the night before and then showed up at her house around 11 a.m. 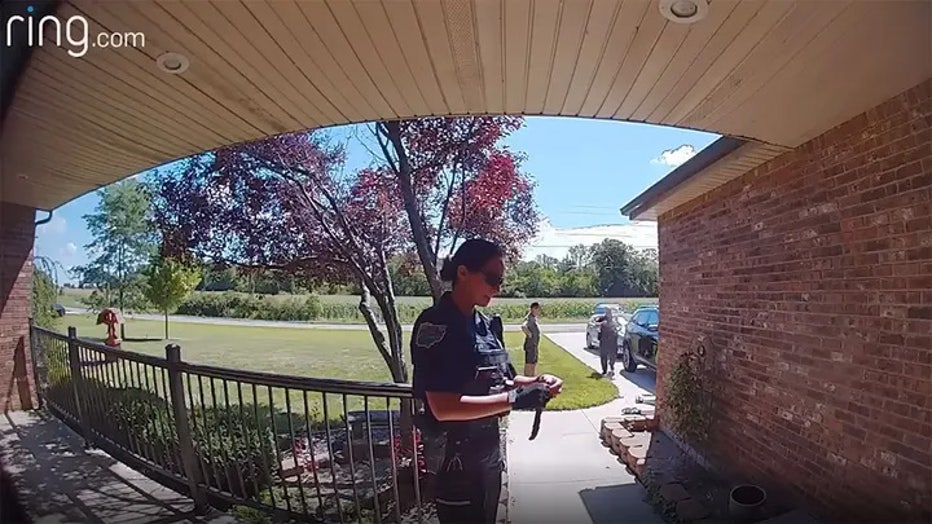 UPDATE: Ohio woman explains what led up to dad shooting her ex-boyfriend at front door

Shelby County Prosecutor Tim Sell told local media that a grand jury declined to charge the father in Rayl’s death, citing the state’s "Stand Your Ground" and "Castle Doctrine" that allows homeowners to use lethal force when threatened.