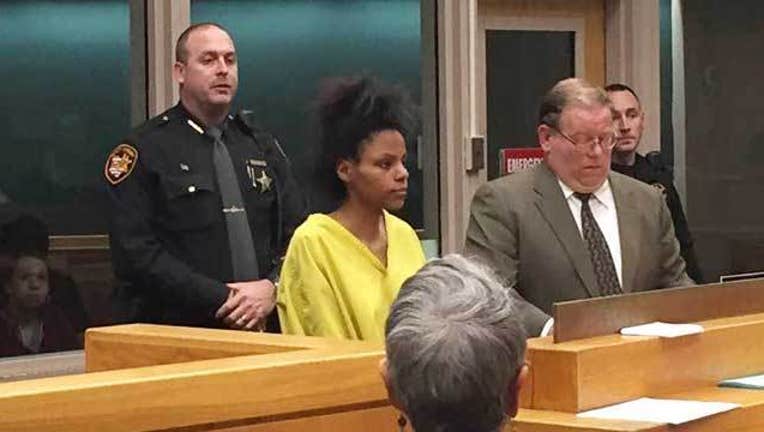 CINCINNATI (KTVU-AP) — An Ohio mother accused of decapitating her 3-month-old daughter is in jail with bail set at $500,000.

Bail was set Friday for Deasia Watkins, who was charged with aggravated murder after her daughter was found decapitated Monday on a kitchen counter in the Cincinnati home of an aunt who was caring for her.

A handcuffed Watkins didn't speak at Friday's hearing in Hamilton County Municipal Court. Judge Melissa Powers scheduled March 26 as the date for Watkins to go before a grand jury, which would decide on any indictment. Attorney Michael Joseph Trapp, who is representing Watkins, said Friday that he had no immediate comment. Watkins, who had been hospitalized since she was taken into custody Monday, has since been transferred to the county jail.

Watkins was considered a threat to her child and had been "acting crazy" and talking about demons when a juvenile court judge in March placed the baby in the custody of Hamilton County Job and Family Services, according to court documents. Social workers later placed the baby in the temporary care of an aunt, who authorities say was warned to keep the mother away from the child unless social workers were present.

Police responding to a 911 call on Monday found the baby decapitated and stabbed multiple times with a large chef's knife. She also had a fractured arm, and the knife had been placed in her hand, authorities said.

Watkins was hospitalized briefly after police on Jan. 25 found Watkins screaming and the baby crying at Watkins' home. James Brown, who authorities believe is the baby's father, said Watkins had been "acting crazy lately, speaking of demons," according to court documents.

Court documents also show that Watkins was diagnosed with postpartum psychosis, and doctors declared her unsafe around the child unless she took prescribed medication.

The prosecutor's office says the agency followed court orders, finding a relative to care for the child and checking on her numerous times. But Deters has said social workers didn't know the mother apparently moved into the aunt's home about a week before the slaying.

The prosecutor's office had no comment Friday. Authorities haven't released the name of the aunt, who Deters said may be needed as a witness.