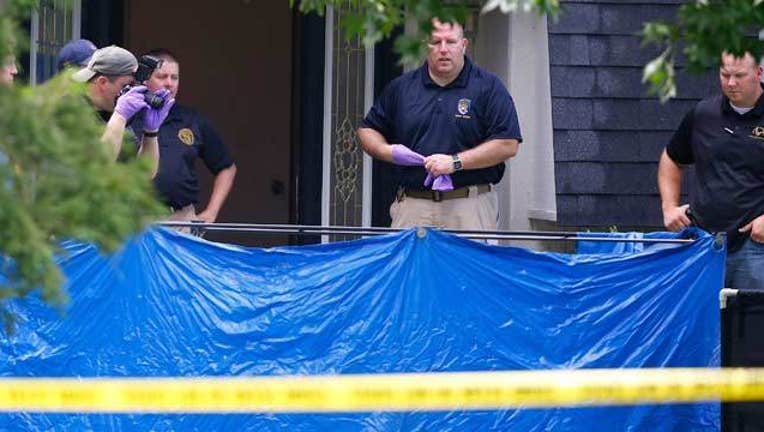 BROKEN ARROW, Okla. (AP) — Oklahoma police responding to a 911 call in which no one spoke found a gruesome scene at a suburban Tulsa home — five members of a family dead or dying from stabbing and a sixth wounded but alive near the front door.

Broken Arrow Police Cpl. Leon Calhoun said Thursday that two teenage sons were apprehended and expected to be charged in the deaths of their parents, three siblings and an attack on a fourth sibling. A fifth sibling, a 2-year-old girl, was found unharmed and transferred to state custody.

"It certainly is shocking. I'm shocked," neighbor Patricia Statham said. "I feel so bad for everyone who walks into that house. You can see it in the faces of the officers when they come out."

Calhoun identified the parents killed as David and April Bever, ages 52 and 44. He identified one of the two suspects in the deaths as their 18-year-old son, Robert Bever. The other suspect, a 16-year-old son, was not identified because he is a juvenile.

The three children found dead were boys ages 12 and 7, and a girl 5 years old, Calhoun said. The two survivors were a 13-year-old girl, who was injured, and the 2-year-old girl. None of those names were released.

At the scene, investigators stepped gingerly around pools of blood, their feet covered to help protect the evidence. Other officers erected black tarps and blue tarps to veil two bodies in the front yard as the sun rose Thursday. A gust of wind blew down one section of the makeshift wall, revealing a bloody white sheet.

"I've been here 19 years and I don't know if we've had more than three homicides in a year," said Broken Arrow Police Cpl. Leon Calhoun, the department spokesman. "This is the worst single criminal event in Broken Arrow history."

According to Calhoun, officers responding to a 911 call at about 11:30 Wednesday night could not enter the house through the front door but heard moaning and found another way inside. They came across the injured 13-year-old first and dragged her outside for fear the killer might still be in the house.

And they did the same with two other victims, not knowing whether they were dead or alive.

Elsewhere in the house, they found three more bodies.

A tracking dog led officers to 16- and 18-year-old brothers in woods near the house. They were taken to the Broken Arrow Police station for questioning and would likely be transferred to the Tulsa County Jail, Calhoun said.

"Anytime someone murders their family members, as young as 5, I don't see how there could be a mental process for that," Calhoun said.

Neighbors said they knew the nine — in part because they stood in contrast with others in a close-knit neighborhood.

Bill Whitworth, 46, who drives a bread truck, said his 18-year-old son was the same age as one of the teenagers detained.

"My son never had an opportunity to play with him because their parents wouldn't allow them to play with the other kids," Whitworth said. The only time he'd see the family was when "I saw the Suburban backing out of the driveway."

Helen Hoagland, 88 and a neighborhood resident for 42 years, described the children as home schooled and kept on a tight leash. The family had helped with neighborhood Christmas decorations, but stopped after two years.

"We just have a great neighborhood. That's just crazy; it's absolutely crazy," Hoagland said as she watched police work the crime scene before dawn.

Statham, 74, said she would see the children cutting grass or playing outside and would have never expected trouble.

"Usually the worst thing we have here is kids with baseball bats destroying mailboxes," she said.

Police Sgt. Thomas Cooper said officers responded to the home near the Indian Springs Country Club after emergency operators received an "open 911 call" — probably placed by the wounded girl — in which no one spoke but the line remained connected. Police traced the number to the home and found a scene so disturbing that officers warned that it could take all of Thursday to process evidence.

Broken Arrow, a suburb of about 100,000 people, is on the Arkansas River just southeast of Tulsa and the home is in a well-established, upper-middle-class neighborhood surrounded on three sides by the country club. Property records showed the home sold for $245,000 in 2007, and Tulsa County tax records show it is among the largest and most expensive homes on the block.