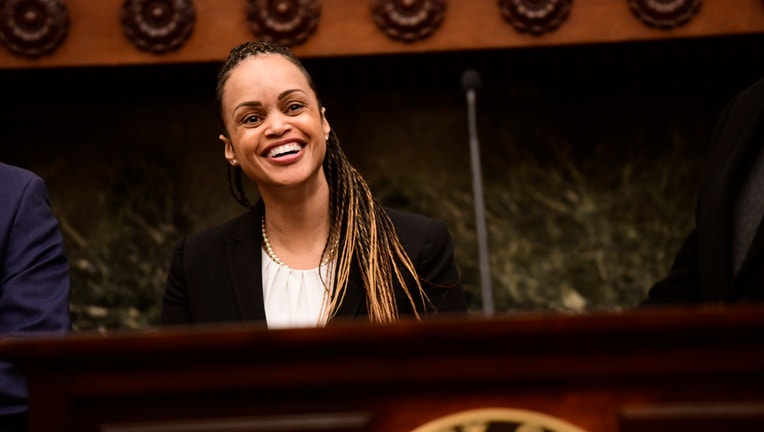 PHILADELPHIA (AP) - The first black woman named to lead Philadelphia’s troubled police department pledged to be a “conduit” between the community and police and to address the racist and sexist tensions dividing the force.

Democratic Mayor Jim Kenney named Portland Chief Danielle Outlaw to the job on Monday, four months after the last commissioner resigned abruptly in the wake of a sexual harassment lawsuit.

“My sons are 21 and 18. I understand the fear that’s out there in our communities of the police. I understand the mistrust. I understand also, on the other side, why we do what we do in law enforcement,” Outlaw said at an afternoon press conference at Philadelphia City Hall.

Outlaw spent nearly two decades with the police department in Oakland, California, before being named Portland’s chief more than two years ago, becoming the first black woman to hold that job.

Kenney chose her from among 31 applicants, 15 of them insiders. He said he was confident she was the right person to implement reforms “with urgency.”

“With our support, she will tackle a host of difficult issues from racism and gender discrimination to hard instances of sexual assault on fellow officers,” Kenney said at the news conference.

Outlaw must also address the daily toll of gun violence in Philadelphia, a city of about 1.5 million people that’s tallied 353 homicides this year, more than New York City and a significant jump from this decade’s low of 245 notched five years ago.

City police also deal regularly with the effects of poverty, opioid addiction, mental illness and other social problems. Outlaw hopes more solutions can be found outside of law enforcement.

“I do not believe that first responders should be dealing with a lot of these issues, because they are not crimes,” she said Monday. “We have to be flexible, we have to be willing to adapt, (so) it’s not just arrest, arrest, arrest.”

City police have also clashed with progressive District Attorney Larry Krasner, a veteran civil rights lawyer who has championed the release of 10 people wrongly convicted of murder in the past two years and banned police with credibility problems — named to an office “Do Not Call” list — from testifying in court.

Krasner said he hoped Outlaw’s work on community policing and justice would “match her words.”

Recent lawsuits have accused department brass of ignoring complaints that female officers were being sexually harassed by colleagues and supervisors and making it difficult for them to keep nursing when they return from maternity leave.

Richard Ross Jr. resigned as commissioner last summer, after a lawsuit alleged that he ignored sexual harassment complaints because he’d once had an affair with one of the complaining officers. Ross denied that he’d retaliated against anyone.

In October, a police inspector was charged with sexually assaulting three female officers he had mentored over the years. And, in July, the department pledged to fire more than a dozen officers as part of a national investigation of racist and violent posts made to police social media pages.

In Portland, Democratic Mayor Ted Wheeler brought in Outlaw to bring stability to a department that had experienced a revolving door of leadership, making her the fifth person to in the chief’s job in less than three years.

After being Oakland’s deputy chief, Outlaw took over a Portland department that has struggled to recruit and retain police officers. The department has also been criticized for its handling of protests and clashes between right-wing groups who come to the liberal city and the counter-protesters who show up to confront them.

Outlaw, on Monday, said she will protect free speech rights, but not those who turn out only to incite violence.

She said she understands her place in history, but hopes the issue soon becomes moot.

“I understand it’s also my obligation to hold the doors open behind me to ensure that we’re not in 2020 still talking about firsts,” she said.