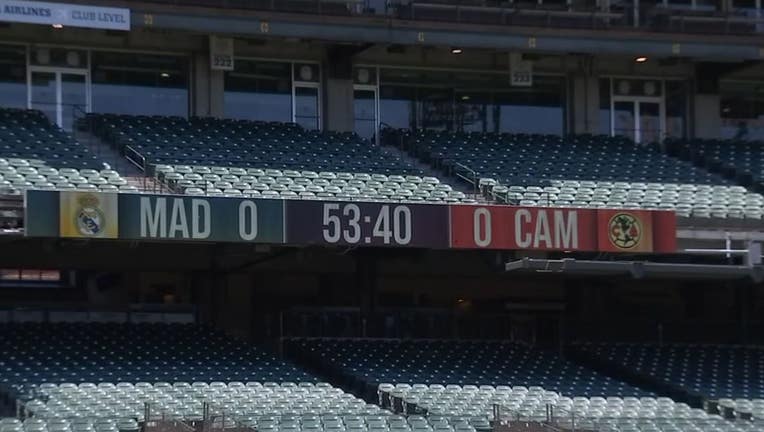 SAN FRANCISCO - The home of the San Francisco Giants is much more than just a ballpark. Oracle Park was selected to host two of soccer's most popular clubs, giving soccer fans in the Bay Area a unique chance to see some of the sport's biggest starts in person.

Crews had a few days to turn the baseball field to a soccer pitch, then even fewer days to convert it back.

"It's really a dream come true," said Jorge Costa, the Chief Venue Officer and Vice President of Oracle Park. "Soccer, for me, it's in my blood, in my soul. Baseball is in my heart."

The Giants were away for four days before the scheduled soccer match. To make the transition, Costa said the park had to put down more than 32,000 sq. ft.

The mound is broken up into six pieces and carried away by forklift to storage.

By game time, thousands of fans packed the stadium. Some, skeptical of the idea.

"We're used to seeing the Giants here," said Jorge Gorgoa, a Club America from San Francisco. "Seeing two other teams that have nothing to do with baseball, it's going to be interesting."

"At first I thought it was fake," said Renata Ramirez, a Real Madrid fan from Saulsalito.

"Oracle Park, we know it for the Giants, so I thought ‘how are they going to do a whole soccer game in a baseball field.’"

During the match, you could still see the baseball diamond under the grass, along with the Bay behind the stadium and the iconic Coke Bottle slide. The goal posts were borrowed from the athletics department at UC Berkeley.

Fans often attempted a stadium-wide wave, while yellow smoke bombs went off toward the end of the game. The match ended in a 2-2 draw, in a game where both teams played a number of their stars.

KTVU asked some Real Madrid personnel what they thought of playing their game in a historic baseball park.

"The event was very good," coach Carlo Ancelotti told KTVU's James Torrez in Spanish. "The pitch was well-prepared. It's a little rare, but it was a beautiful game."

"In the end, I think it was a very beautiful experience in an incredible stadium."

The break-down and transition back to baseball happened immediately after the match. Crews lifted the grass on top of the clay to re-expose the diamond. They re-installed the pitcher's mound and the bases, working to meet a 36-hour deadline.

The ballpark successfully transitioned back by Noon Thursday afternoon, just a few hours before the Giants returned to Oracle for a game against the Chicago Cubs.

The Bay Area does have soccer specific venues, like PayPal Park, host of the San Jose Earthquakes. Levi's Stadium in Santa Clara will soon host a FIFA World Cup match in 2026. But Costa says Oracle Park, despite being a baseball venue, competes for international soccer attention.

"I think the location of this ballpark is spectacular, and we're in a city people want to be in," he said. "In order to compete, you hire people and take advantage of the technology that's available and hire experienced people in international events. That's how you compete."

In the past, the park has hosted international matches, college football games, and rugby matches. Park leaders say this latest match will set a momentum to bring those events more often, and even expand to more sports like cricket, monster truck rallies, and even multi-day tournaments.