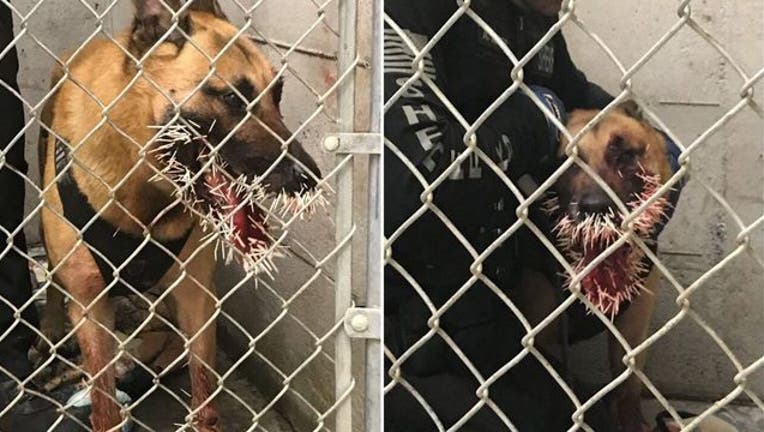 FOX NEWS - A police K-9 in Oregon was in pursuit of a suspect when a porcupine crossed the dog's path and pierced him with more than 200 quills, authorities said Monday.

Odin, the K-9 officer, was on the trail of a fleeing suspect — identified as 29-year-old Devin J. Wilson — on Saturday when he got in a tangle with the porcupine, the Coos County Sheriff's Office said. Several of the 200 quills went into the dog’s mouth and two stuck close to his eye.

Police said they immediately suspended the search and rushed Odin to a veterinarian at Hanson-Meekins Animal Hospital in Coos Bay. The K-9 officer was sedated and treated for more than two hours.

“The sheriff’s office would like to offer thanks to the staff at Hanson-Meekins for their dedication and professional care, as well as to the public for the outpouring of support for K9 Odin,” a news release said.

Dozens of people wished Odin a "speedy recovery" online. Deputies told FOX12 Oregon Odin was doing well as he rested at home, but his porcupine assailant “remains at large.”