Overturned crane blocking Highway 237 back on its wheels

It took most of the day Friday, but a toppled crane blocking all eastbound lanes of a South Bay freeway is back on its wheels.

SAN JOSE, Calif. - Both directions on Highway 237 in San Jose were closed Friday morning so crews could remove a large crane that overturned, according to the California Highway Patrol.

It took most of the day to clear the 220,000-pound crane from the highway. Slowly and nearly silently, it was hoisted back onto its tires.

The Goliath sized vehicle wound up sideways after an accident around  6 a.m. on westbound Highway 237 when the driver lost control, went through a guardrail into the eastbound lanes and flipped near the Zanker Road offramp, the CHP said.

Officer Ross Lee said the wrecked crane spilled 100 gallons of fuel and hydraulic fluid onto the roadway. And then moments later, a second accident occurred as the driver of a tour bus traveling westbound rear-ended a pickup truck, sending that vehicle into the eastbound lanes also.

SkyFOX overhead the cleanup of an overturned crane on Highway 237

Commuters are advised to avoid the area and take alternate routes.

The duel accidents backed traffic up in the South Bay impacting motorists' Friday morning commute days before a major holiday.

“I’ve seen a whole bunch of traffic backed up after North 1st street. From there It’s been bumper-to-bumper the whole time. It’s crazy,” one motorist said.

While drivers headed for alternate routes, a team of engineers and other experts worked to get the 88-foot long crane upright. There was a flurry of activity around the accident site, with CalTrans crews clearing debris and repairing a section of the damaged median. After several hours, the measurements were right to lift the crane back onto its wheels.

Two drivers were injured in the pair of accidents. The driver who was hauling the crane suffered minor injuries but wasn't hospitalized. The person driving the pickup truck was taken to a hospital with minor injuries.

CHP said the westbound lanes will reopen by 5 p.m. and the eastbound portion between 8 and 9 p.m. 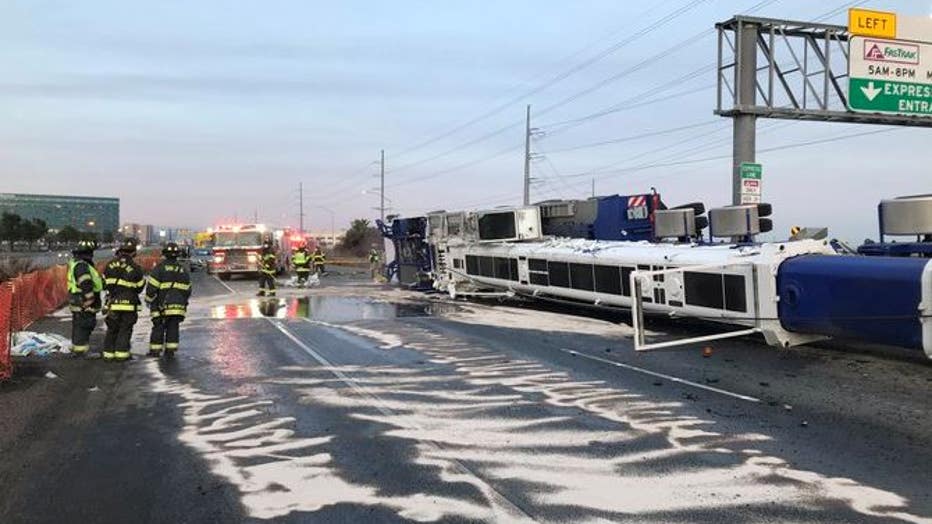