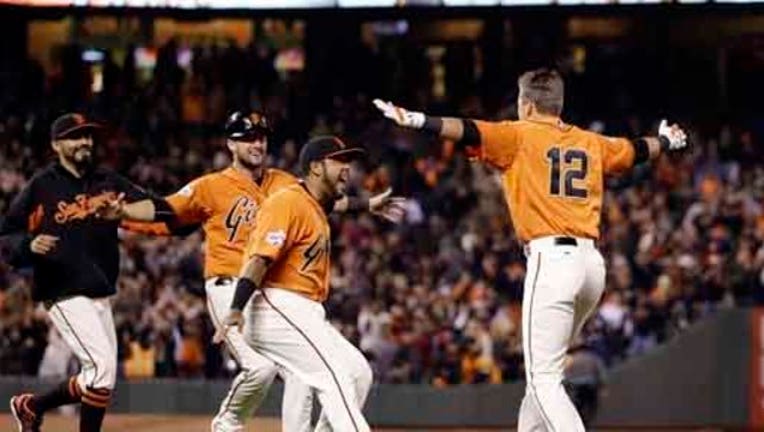 SAN FRANCISCO (AP) — Pinch hitter Joe Panik singled in the winning run with two outs in the bottom of the ninth, lifting the San Francisco Giants past the Los Angeles Angels 3-2 on Friday night.

Angel Pagan had two hits and drove in a run for the Giants, who have won seven of 11 since ending an eight-game losing streak.

David Freese hit a sacrifice fly, scoring Erick Aybar with the tying run in the top of the eighth. Aybar reached on a Matt Duffy fielding error.

Buster Posey beat out an infield single to open the ninth, Justin Maxwell sacrificed pinch runner Gregor Blanco to second and walks to Andrew Susac, who singled to give the Giants a 2-1 lead in the seventh, and Brandon Crawford loaded the bases for Panik, who singled sharply up the middle against Joe Smith (0-1).

The game was briefly paused in the ninth when home plate umpire Bill Miller was hit on the knee with an errant pitch. He stayed in the game.

Santiago Casilla (2-0) recorded the final five outs for the win.

Giants' starter Chris Heston retired 16 of 17 batters he faced over one stretch and took a two-hit shutout into the seventh before faltering. He gave up a run on five hits in his 6 1-3 innings, walking one and struck out five.

Matt Joyce's game-tying single chased Heston and left runners on first and third with one out for Jean Machi, who got the final two outs.

Nora Aoki doubled leading off the first and eventually scored on Pagan's sacrifice fly that gave the Giants the early lead.

C.J. Wilson lasted seven innings, giving up two runs — one earned — on four hits. He walked one and struck out five.

Angels: IF Albert Pujols (sore hamstring) did some running and was scheduled to go through a baseball workout, including batting practice. "We'll see how he does and how things line up for tomorrow," Angels manager Mike Scioscia said. The Angels recalled IF Efren Navarro from Triple-A Salt Lake as added depth at first base. IF Grant Green was sent down to make room.

Giants: OF Hunter Pence took batting practice for the first time since suffering a broken bone in his left hand during spring training. There's still no timetable for him to start a rehab assignment. RHP Jake Peavy (back strain) has been playing catch on flat ground and will throw a bullpen on Saturday.

Angels: LHP Hector Santiago (2-1, 2.28) makes his first career against the Giants on Saturday. He's 1-1 with a 2.87 ERA in 13 interleague appearances, including six starts.