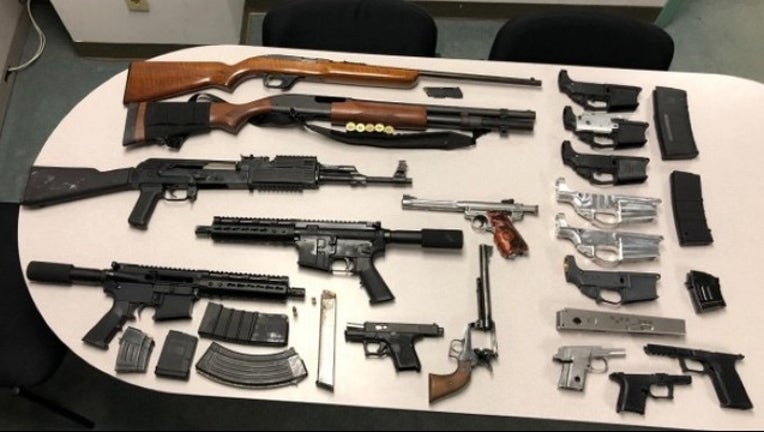 Terry Ferguson, 33, was arrested early Saturday on suspicion of manufacturing and selling illegal guns from a home just a block away from a local high school.

ANITOCH, Calif. (BCN) - An Antioch man was arrested early Saturday on suspicion of manufacturing and selling illegal guns from a home just a block away from a local high school.

Terry Ferguson, 33, was taken into custody after police served a search warrant at 6 a.m. at his house in the 200 block of J Street.

A felon on parole, Ferguson is suspected of possessing, manufacturing, and selling illegal firearms from the house.

Several people were detained at the home, including Ferguson, while detectives searched the residence. In Ferguson's bedroom, they found firearms and evidence that Ferguson was manufacturing unregistered, fully automatic handguns and rifles.

Police released a photo of several weapons found at the home on J Street. The house is two blocks away from the Antioch Police Department and one block from Prospects High School.

Ferguson is on parole for robbery and on county probation for possession of narcotics while armed with a firearm. He was booked at Contra Costa County Jail on suspicion of being a felon in possession of firearms and ammunition, possession of prohibited firearms, and illegally manufacturing and selling firearms.

Anyone with information about the case is asked to call the Antioch Police Department non-emergency line at (925)778-2441. Tips may be texted to 274637 (CRIMES) using the key word ANTIOCH.