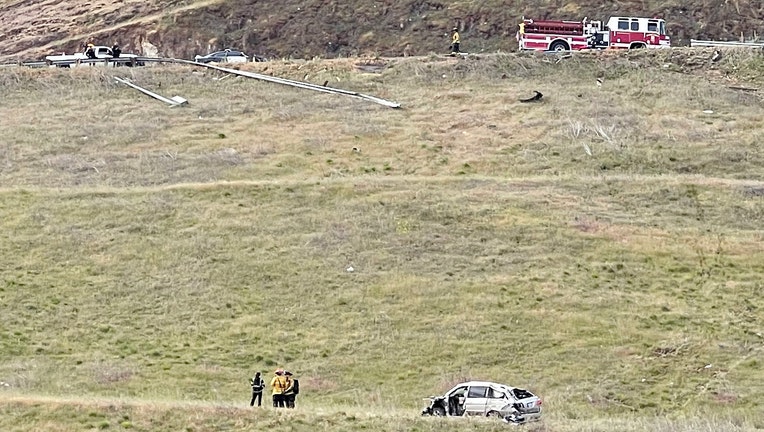 California Highway Patrol (CHP) and Alameda County Fire Department personnel respond to the scene of a fatal rollover crash on westbound I-580 on the Altamont Pass east of Livermore, Calif., on April 24, 2021. (Photo courtesy of the Alameda County Fi

LIVERMORE, Calif. - One person was killed and another injured on Saturday morning when the minivan they were riding in went through a guardrail on westbound I-580 in the rural Altamont Pass and rolled at least 100 feet down an embankment, authorities said.

A passenger who was not wearing a seatbelt, according to CHP spokesman Tyler Hahn, was ejected from the car and transported by air to Eden Medical Center in Castro Valley.

That person was pronounced dead at the hospital, Hahn said by email.

The driver, who was trapped inside the battered vehicle, was taken to the same hospital by ambulance.

The single-vehicle incident west of the North Flynn exit, which began at 8:39 a.m., damaged a stretch of guardrail 60 to 100 feet long, Hahn said.

Traffic was backed up nearby for hours afterward.

Another fatal rollover crash occurred in the same area on April 11, when a truck rolled hundreds of feet down an embankment along the eastbound side of I-580.