According to the District Attorney's Office, Pelosi, 81, will be required to serve five days in jail, though he already served two days and received conduct credit for two other days. Napa County Superior Court Judge Joseph Solga said Pelosi will work eight hours in the court’s work program in lieu of the remaining day.

MARTINEZ, Calif. - The sports car driven by Paul Pelosi when he drunkenly crashed in Napa will soon hit the auction block, according to a report from TMZ.

Pelosi's 2021 Porsche 911 Carrera S which was involved in his May DUI collision was listed on the auction website Copart.com with a retail value of $168,576 and just 2,738 miles on it.

The vehicle is sitting at a lot in Martinez and not eligible for bids just yet.

On Tuesday, Pelosi pleaded guilty to driving under the influence resulting in the crash and was sentenced to five days in jail and three years of probation.

The Copart listing has current photos of the Porsche which shows damage to the car's undercarriage and back bumper. There are also some dings on the vehicle's side. 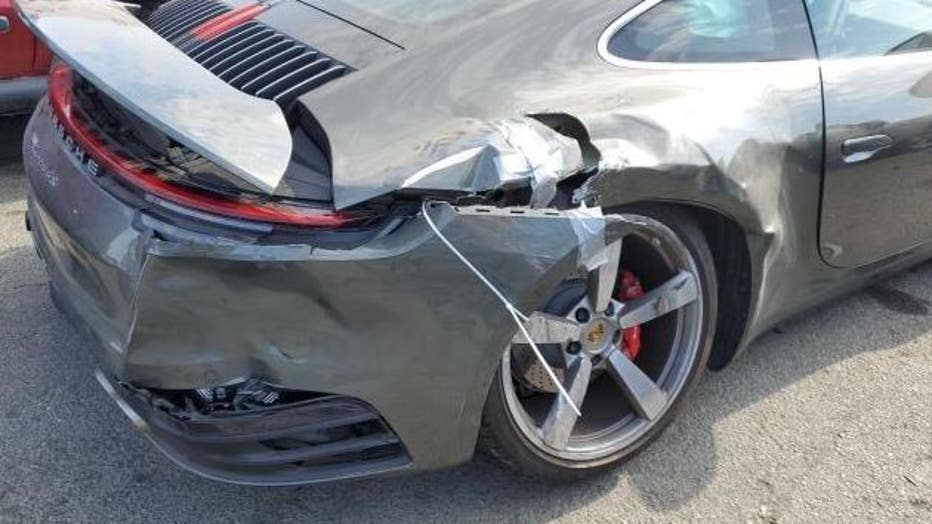 The 2021 Porsche 911 Carrera S believed to be driven by Paul Pelosi when he drunkenly crashed in May.  (Copart.cov)

According to Fox News, Pelosi’s vehicle identification number is redacted in police reports, and a Carfax vehicle history report on the VIN of the car for sale does not show the owner’s name.

However, the Carfax report shows a "severe" accident on May 28 — the day of Pelosi’s crash — in which the vehicle sustained "front or side impact" damage, deployed its airbags and had to be towed.

The vehicle damage seen in photos on the auction website mirrors that of the damage sustained in the DUI collision.

According to police reports, the vehicle was removed from the scene by a tow truck when Pelosi was taken into custody.

Dashcam footage of House Speaker Nancy Pelosi's husband, Paul, being the subject of a DUI test.

Dashcam footage of House Speaker Nancy Pelosi's husband, Paul, being the subject of a DUI test.

A DUI test showed Pelosi had a blood alcohol content of .082%, just over the legal limit.

Responding officers said they found Pelosi in the driver’s seat of his Porsche and another involved driver standing outside a sport utility vehicle, according to the complaint.

Officers reported that Pelosi was "unsteady on his feet, his speech was slurred, and he had a strong odor of an alcoholic beverage."