The Pfizer-BioNTech COVID-19 vaccine was found to be highly effective at protecting against infection, severe disease and death in two new studies published this week, based on real-world data.

Previous studies have suggested that the two-dose vaccine still works well against B.1.1.7, a variant first detected in the U.K. and thought to be more infectious than the original strain. However, the vaccine appeared to be less effective against B.1.351, a variant first identified in South Africa.

One of the new studies, published Wednesday in the New England Journal of Medicine, found that the Pfizer COVID-19 vaccine was about 90% effective at preventing any infections caused by B.1.1.7 variant, which is now widely circulating around the globe.

The study also found that while it was somewhat less effective against the B.1.351 variant, it still was 75% effective at preventing infection among those who had received two doses.

One of the study’s authors, Laith Abu-Raddad, an infectious disease epidemiologist at Weill Cornell Medicine-Qatar, told the New York Times that even with slightly reduced effectiveness against the South African variant, it’s still good news.

"We’re talking about a variant which is probably the nastiest of all the variants of concern," Abu-Raddad said. "It’s not the 95 percent we were hoping, but the 75 percent is really great."

The Pfizer vaccine also remained highly effective at protecting against severe, critical or fatal disease from any strain of the coronavirus, including the B.1.1.7 and B.1.351 variants — at 97.4%.

Qatar launched its mass immunization campaign with the vaccine in late December, and the study was based on more than 260,0000 people who had completed the two-dose vaccination by March 31. Genome sequencing between late February to mid-March showed that B.1.1.7 and B.1.351 each accounted for about half of the country’s cases. Nearly all cases after March 7 were caused by either of the variants, the study said.

A second study, also published Wednesday in The Lancet, also found that two doses of Pfizer’s vaccine were "highly effective across all age groups" at preventing symptomatic and asymptomatic infections, as well as COVID-19-related hospitalizations, severe disease and death. This included infections caused by the B.1.1.7 variant.

The study was conducted by researchers at the Israel Ministry of Health and Pfizer, based on more than 232,000 COVID-19 infections reported in Israel between Jan. 24 and April 3. In early 2021, the B.1.1.7 variant was estimated to account for 95% of all cases in Israel, researchers said.

Israel has fully vaccinated more than half of its population, according to the Johns Hopkins University Coronavirus Resource Center. 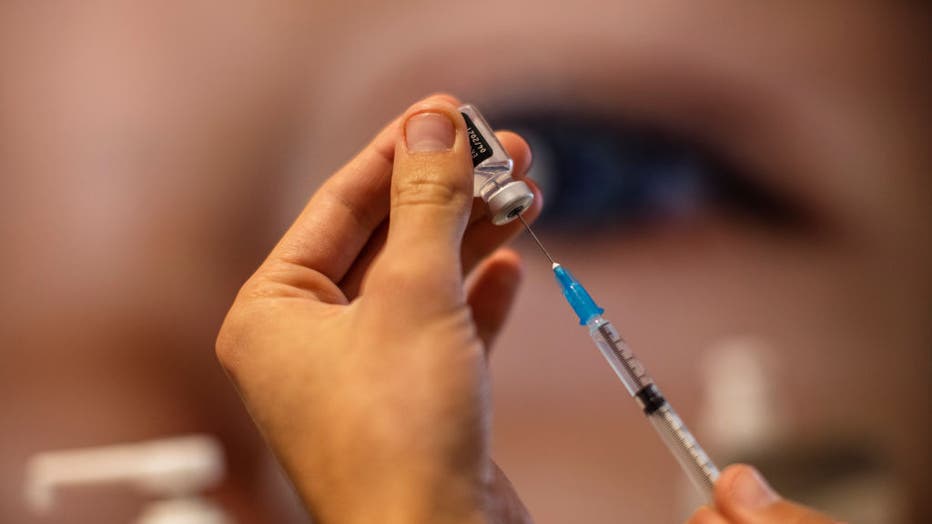 FILE - A medic fills up a syringe with a dose from a vial of the Pfizer-BioNTech COVID-19 vaccine at a vaccination center during a nationwide campaign on Jan. 11, 2021, in Jerusalem, Israel. (Photo by Ilia Yefimovich/picture alliance via Getty Images

In the U.S., more than 134 million Pfizer vaccine doses have been administered since receiving an emergency use authorization from the Food and Drug Administration in December. On Friday, the company began its application to the FDA for full approval of its COVID-19 vaccine.

The Biologics License Application (BLA) process involves submitting data nonclinical and clinical data to support licensure of the COVID-19 vaccine. Pfizer will submit the data over the coming weeks, then seek priority review — which would cause the FDA to take action within six months, instead of the typical 10-month time frame.

Full approval would only apply to people 16 and older. Pfizer is also seeking expansion of its EUA for children between 12 and 15 years old.