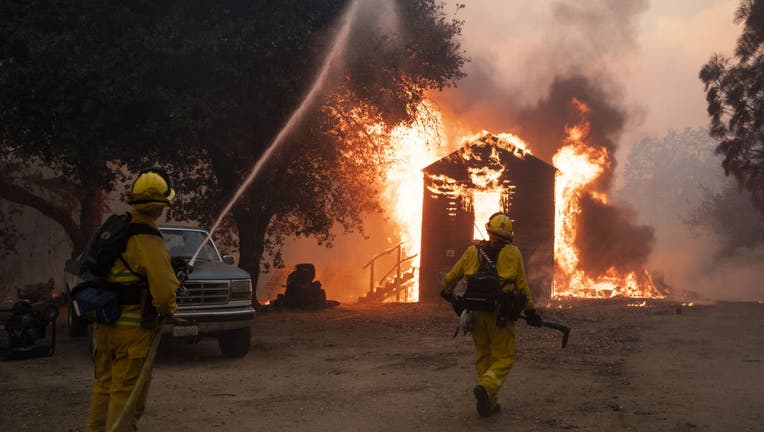 Firefighters work to prevent the fire from spreading during the Zogg fire near the town of Igo in Shasta County, California, U.S., on Sunday, Sept. 27, 2020. In Shasta County, the new, fast-spreading Zogg fire burned 7,000 acres by Sunday evening, pr

REDDING, Calif. - Pacific Gas & Electric on Thursday pleaded not guilty to involuntary manslaughter and other charges it faces after its equipment sparked a wildfire that killed four people and destroyed hundreds of homes in Northern California two years ago, prosecutors announced.

PG&E was arraigned at a court in Redding on 31 criminal counts and enhancements, including four counts of involuntary manslaughter, after being accused of recklessly starting the Zogg Fire, the Shasta County District Attorney’s Office said in a brief statement. A preliminary hearing in the case was set for January.

The wind-whipped blaze began on Sept. 27, 2020, and raged through rugged terrain and small communities west of Redding, killing four people, burning about 200 homes and blackening about 87 square miles of land.

Last year, state fire investigators concluded the fire was sparked by a gray pine tree that fell onto a PG&E distribution line. Shasta and Tehama counties have sued the utility, alleging negligence. They say PG&E failed to remove the tree even though it had been marked for removal two years earlier. The utility says the tree was subsequently cleared to stay.

The district attorney determined that the company was criminally liable for the fire and charged the utility last September.

"Today we entered a formal not guilty plea to all charges in the 2020 Zogg Fire in Shasta County," the company said in a statement. "We accept CAL FIRE’s finding that a tree falling into our equipment started the fire, but we do not believe there was any criminal activity."

The charges PG&E faces include enhancements for injury to a 29-year-old firefighter who was hit by a falling tree that fractured his spine, paralyzing him from the chest down. They also include felony arson counts linked to several fires started by the utility’s equipment in Shasta County over the last year.

PG&E, which has an estimated 16 million customers in central and Northern California, filed for bankruptcy protection in 2019 after its aging equipment was blamed for a series of fires, including the 2018 Camp Fire that killed 85 people and destroyed 10,000 homes in Paradise and neighboring communities.

The California Department of Forestry and Fire Prevention said in their final report on the Dixie Fire, the second-largest in California recorded history, that the utility failed to act quickly after one of its power lines malfunctioned last July, sparking the blaze. By the time a PG&E worker arrived at the scene "the fire was too large for him to contain and a 911 response was requested," state investigators wrote in the report the utility made public Thursday.

The Dixie Fire in Northern California swept through five counties and burned more than 1,300 homes and other buildings. The blaze was caused by a tree hitting electrical distribution lines west of a dam in the Sierra Nevada, where the blaze began on July 13, Cal Fire investigators said.