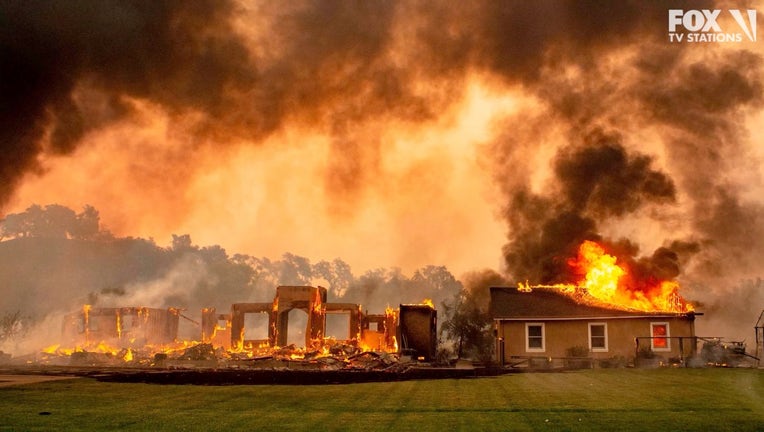 SAN FRANCISCO - Pacific Gas & Electric will pay $43.4 million to government agencies in three Northern California counties to cover bills left behind from wildfires ignited during the past two years by the beleaguered utility's long-neglected power grid.

The settlements announced Wednesday will cover some of the costs incurred by 10 government agencies during the Kincade Fire that destroyed more than 100 homes in Sonoma County during October 2019 and the Zogg Fire that killed four people in Shasta County last September. Some of the money will also go to Tehama County, where the Zogg Fire also raged.

All three counties are part of a sprawling territory where PG&E provides electricity to about 16 million people. In recent years, though, the utility has been wreaking havoc with crumbling equipment that hasn't been properly maintained and power lines that frequently come into contact with trees and other vegetation that should have been trimmed but weren't.

The San Francisco company is still facing 33 criminal charges of inadvertently injuring six firefighters and endangering public health in Sonoma County for the Kincade Fire — accusations that PG&E denies. The state also forwarded a March report blaming the Zogg Fire on PG&E to the Shasta County District Attorney's office to determine if criminal charges may be warranted there, too.

PG&E's neglect has at times had catastrophic consequences, most notably during 2017 and 2018 when a series of wildfires blamed on its equipment burned down more than 28,000 buildings and killed more than 100 people.

The devastation prompted PG&E to spend 17 months in bankruptcy court, where it negotiated a $13.5 billion settlement with wildfire victims. It also resulted in the company pleading to 84 counts of involuntary manslaughter in Butte County, where the town of Paradise was wiped out by a the Camp Fire in 2018.

After emerging from bankruptcy protection last summer, PG&E hired a new chief executive, Patricia "Patti" Poppe, to oversee its efforts to upgrade its grid during process expected to last for most of this decade and, in this case, clean up some of its past messes.

"When I joined PG&E earlier this year, I said that I wanted to make it right and make it safe for our customers and communities," Poppe said.

Even so, PG&E continues to be haunted by its conduct before Poppe started her job in January.

California power regulators last month rebuked PG&E for ongoing neglect of its power lines last year. And the utility is scheduled to appear next week before a federal judge weighing whether its role in the Kindcade Fire violated its probation terms for a criminal conviction that came down after its natural gas lines below up a suburban neighborhood south of San Francisco in 2010.