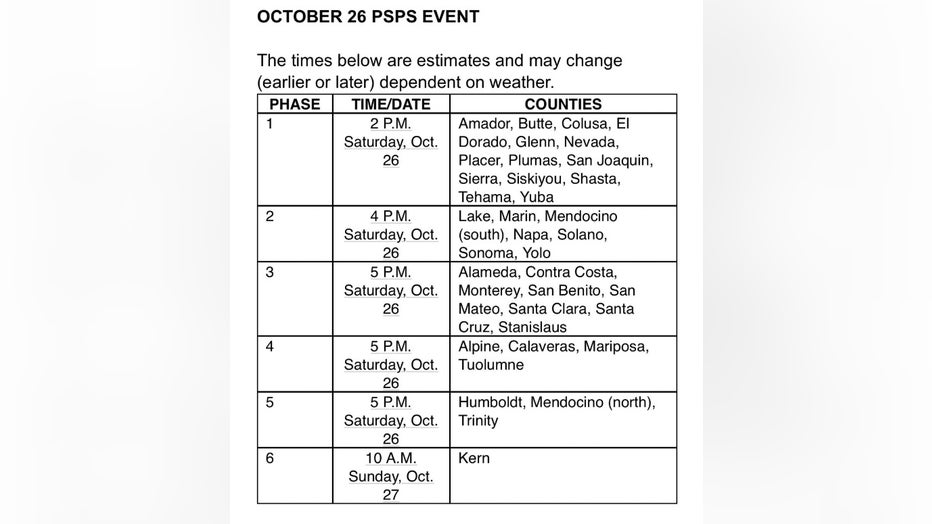 The utility said blackouts started around 2 p.m. Saturday in parts of 36 counties. About 940,000 customers - more than 2 million people - will be affected.

It's the third preventative shut-off in as many weeks amid concern that gusty winds could knock down power lines and spark fires.

Winds picking up Saturday night could gust to more than 85 mph and make conditions extremely difficult for firefighters trying to tame a huge blaze in wine country. 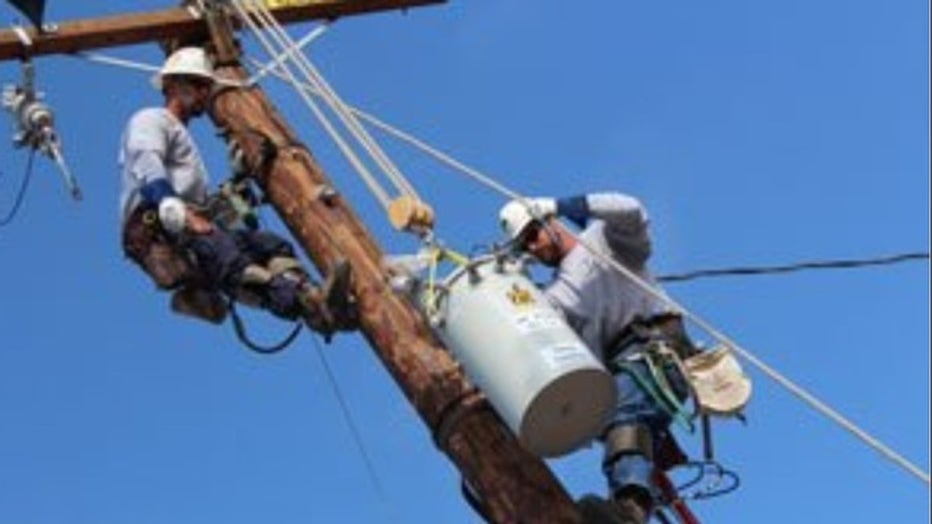 "The PSPS will occur in six phases, times may change (earlier or later) dependent on weather.

PG&E anticipates the all-clear for restoration activities will be given at 6 a.m.on Monday, October 28. That area represents 205,000 customers.

The utility hopes to give the all-clear on Monday, October 28. In total, 256,000 customers will be affected.

The anticipated all-clear date is for Monday, October 28. That area represents 246,000 customers.

Phase five will begin at about 12 a.m. Sunday, October 27, impacting customers in these counties: Alpine, Calaveras, Mariposa and Tuolumne.

The sixth and final phase is scheduled to begin at 9 p.m. Sunday, October 27, impacting customers in Kern County.

The power will be turned off to communities in stages, depending on local timing of the severe wind conditions.

PG&E said there was a delay with power outages as wind forecast models changed.

The times below are estimates and may change (earlier or later) dependent on weather.

Forecasters are predicting winds of up to 60 mph and gusts reaching up to 70 mph in higher elevations.

The shutoffs will begin this evening, and are expected to last through Monday. Customers in portions of 36 counties could lose power at some point.

All Bay Area counties except San Francisco are expected to have some outages over the next three days.

This shutdown could be even bigger than the one that began on Oct. 9. Eventually 738,000 customers in 34 counties lost power at some point during that outage. PG&E was widely criticized for its handling of the event, including for poor communication with customers and local governments.

PG&E has been shutting off power proactively to prevent wildfires after utility lines started massively deadly and destructive fires over the last two years. PG&E has estimated that similar power shutoffs may be necessary for the next decade until the utility can upgrade its technology.

Sign up to receive PG&E voice and text alerts for information on current outages or what is to come. Customers can enroll in zip code alerts by calling 1-877-9000-PGE. Notifications will be delivered via automated call. You can also sign up for text alerts by just texting "ENROLL" to 97633.

Have medical supplies in order and emergency kits on standby.

Ensure you have enough prescription meds to last up to seven days. If you have major medical needs that depend upon electricity, it may be safer to relocate to a friend or family member's home out of the area.

Emergency kits should include: a gallon of water per day for each person and pet. Nonperishable or canned food for up to seven days and a can opener. A solar-powered, hand crank, or battery-powered radio with extra batteries. You should also have a flashlight in your kit.

Officials also advise keeping mobile devices charged and to identify backup charging methods. If you have a generator, make sure you have extra fuel. Keep vehicle fuel tanks full. Remember that gas stations, stores, ATMs in the immediate area will also be without power.

Know how to use the manual release on your garage door and talk to neighbors and friends and share your emergency plans.