OAKLAND, Calif. - Oakland Technical High School senior Ahmed Muhammad has become somewhat of a local celebrity, garnering much love and attention for all of his remarkable accomplishments as he’s set make history as his school’s first Black male valedictorian when he graduates next month. On Monday, the Oakland Police Department celebrated the teen as it shared a photo of him posing with the city’s new police chief, LaRonne Armstrong.

The chief, an Oakland native himself, graduated from Tech rival McClymonds High School in West Oakland. 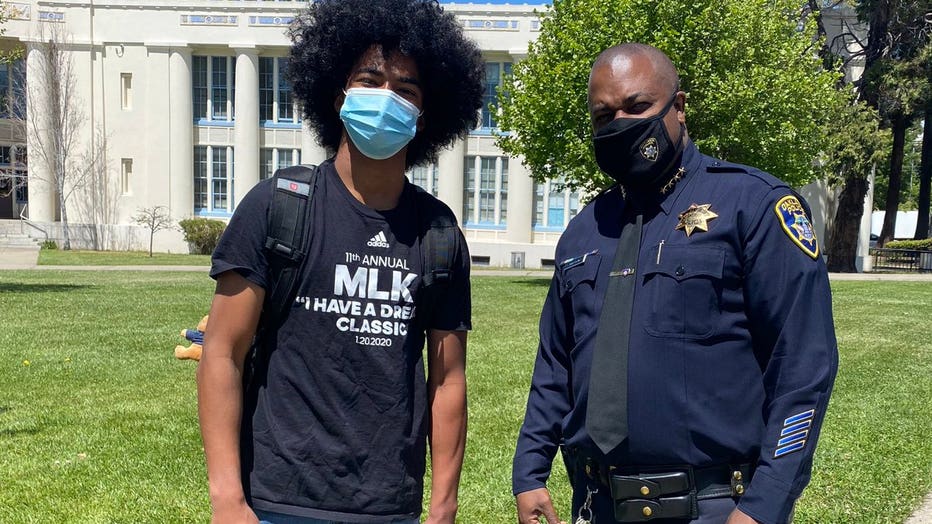 In the photo posted on social media, Armstrong was seen standing proudly next to Muhammad, with the teen's high school serving as a backdrop. Along with the photo was a caption listing some of the student's many accomplishments.

"Chief Armstrong was honored to meet Ahmed Muhammad," the police department shared in a tweet, adding, "The student-athlete and founder of #kitscubed has a 4.73 GPA and is on track to receive a 5.0 GPA for his senior year."

Muhammad’s exceptional academic achievements have led to acceptance letters from every single of the 11 universities he applied to, a list which included Harvard, Stanford, Princeton, Columbia, Howard, the University of Southern California, UC Berkeley, UCLA, UC Santa Barbara, UC San Diego, and UC Davis. Muhammad has less than a week to make his final decision.

He’s also been praised as a key member of the Bulldog's varsity basketball team. Outside his high school accomplishments, he's been acknowledged for his community work as founder of science education company, Kits Cubed. The organization has distributed thousands of science kits to Oakland schools, with a goal of introducing young students to the world of science through hands-on, accessible experiments and projects.

With each kit sold, money goes toward additional kits to be donated to low-income students and communities, the company said.

Since KTVU featured Muhammad and all of his hard work in an article last week, the 18-year-old has received national press coverage, making headlines not only in the Bay Area but around the country. With stories about him shared by multiple news outlets, the praise and accolades have poured in, as he’s generated a good amount of Oakland pride from his community.

Congresswoman Barbara Lee has been among a long list of proud fellow East Bay residents to extend her congratulations to the superstar student.

The photo op with his city’s police chief was just a slice of the well-deserved attention this stand-out student has received, as his community continued to celebrate not only the teen's exceptional accomplishments but all that he represents, including his inspiring work to help lift other young students.