SONOMA, Calif. - The aerial rescue of two trapped Marin County firefighters last week was even more daring than it looked.

"The windier it is, the harder it is to stay in place, especially at night when you can't see much on the ground," said helicopter pilot Paul Bradley. "You just have to focus."

Bradley and tactical flight officer Chris Haas both summoned all their focus during the mission.

"Lifting them up and out of there, it was absolutely a sigh of relief," said Haas, at the Sonoma County Airport where Henry-1 is based.

The call, last Friday night, came directly to their hangar.

"We have multiple firefighters trapped," recalled Haas, and he recognized some panic in the dispatcher's appeal.

"It put the hairs up on the back of my neck instantly, that this is the real deal, and it's not going to be good."

Crews are experts in long-line rescue and are called on throughout the Bay Area. 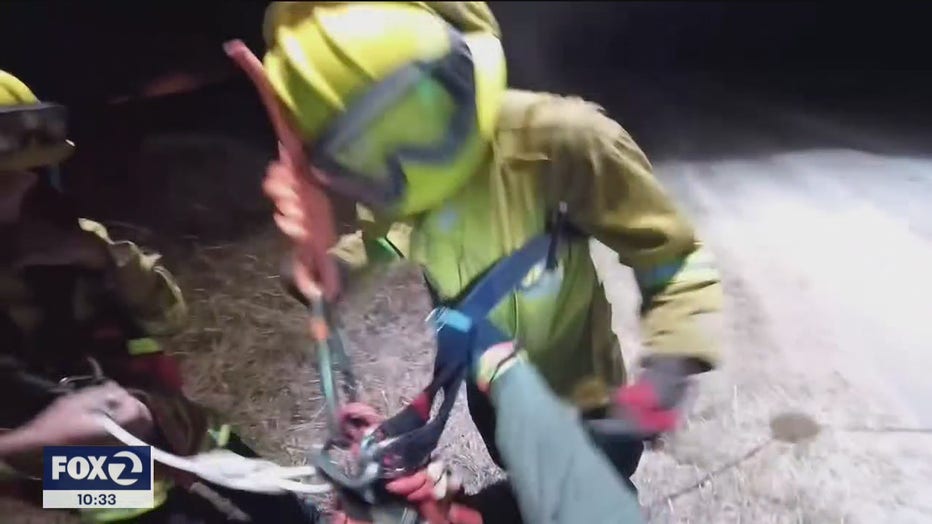 Responding to more than 1,000 missions annually, they are often summoned when victims need extraction from inaccessible places.

"Down through trees, or on a cliff, or even in water, we train a lot for that," said Bradley.

But this was something new: firefighters trapped at the head of Marin County's Woodward fire, twelve minutes away.

And the crew knew, en route, they might get only one opportunity to pull them out.

"It was challenging on the emotional side, for me to keep my emotions in check," admitted Haas, "not sure what we would find."

On arrival, Bradley landed to let Haas out, and strap himself to a 100-foot line.

Back in the air, they were fortunate they didn't have to search the darkness for long.

"We were able to find them, literally as we were arriving on the scene, we saw the firefighters," said Bradley.

The two men stood on a ridge, with the fire roaring about 75 yards away.

They had apparently been hiking the brush as field observers in order to report back on the fire's movements, but somehow ended up in front of it with no escape.

"We saw their headlamps and flashlights and saw where they were and I thought this is as bad as it could possibly be," said Haas.

Dropped down in front of them, he hurried to attach them to the line with harnesses, one a jacket style, the other a collar sling.

It took little more than a minute, but in the moment, felt longer.

"I knew the winds Paul was battling and knew it was my job to get them hooked up to the lines as fast as I could," recounted Haas.

All the while, his helmet camera was capturing the action and the looming flames.

The firefighters were carrying backpacks with firefighting equipment.

"Can we take them with us?" asked one, but Haas knew attaching the packs would take extra seconds he might not have.

"No, we've got to get out of here," he exclaimed in response, "the fire's right there!"

Bradley, flying professionally for 33 years, can't recall ever hovering over wildfire quite so close for so long.

"We try to let every rescue go so we can move on to the next one, but this one really kind of hit home for me," he admitted.

Different because the stakes were so high, and the folks they were saving were first responders like themselves.

"Thank you for coming," said one of the firefighters, as the trio flew dangling, a few hundred feet in the air.

"Anything for you guys," responded Haas.

Only as they were lowered to a dirt road, did Haas and Bradley begin to relax.

"The great feeling starts when you get them back on the ground and back into safety," said Bradley.

Haas and the firefighters exchanged quick hugs and back-slaps before a fire truck arrived to pick them up.

Both men credit teamwork for being able to accomplish what they did.

During missions, Haas can hear Bradley on a headset, but amid the noise, Bradley has to trust his partner's arm signals on altitude and direction.

"It's literally like we're having a conversation separated by 100 feet and I'm dangling from a rope," said Haas, "so for me to give him a cue and he reacts instantly, it's his incredible level of precision."

Packing up the gear to head home, they had a few moments to enjoy the outcome.

"A few fist bumps and 'that was awesome' as we're leaving," said Haas, "but then it's kind of back to work."

And en route to their base that night, they responded to another call, a suspect pursuit.

But as Henry-1 resumes its duties, the firefighter rescues will be memorable, just like the note of thanks they received from one of the men's mothers.

"She wanted us to know her son has two wonderful daughters and a wife at home and because of us, he's home today, so that kind of hit us," said Bradley.