It's been a month since the explosion at Calpine Russell City Energy Center in Hayward and the cause is not yet known. The plant says it was a steam turbine mechanical failure, but that assessment is not official. Meanwhile, the plant is looking to restart operations against the city's wishes.

HAYWARD, Calif. - The cause of a massive explosion at an energy plant that propelled pieces of shrapnel hundreds of feet remains a mystery as the company pushes to have its plant restart later this summer.

Calpine’s large, highly-efficient steam turbine at its Russell City Energy Center in Hayward burst apart just before midnight on May 27. About 40 firefighters rushed to the scene to put out and contain a large fire in the middle of the power facility. No one was hurt.

The blast could be seen on surveillance video lighting up the night sky. Then, a hissing sound was heard as steam and smoke poured from the 4-story building. 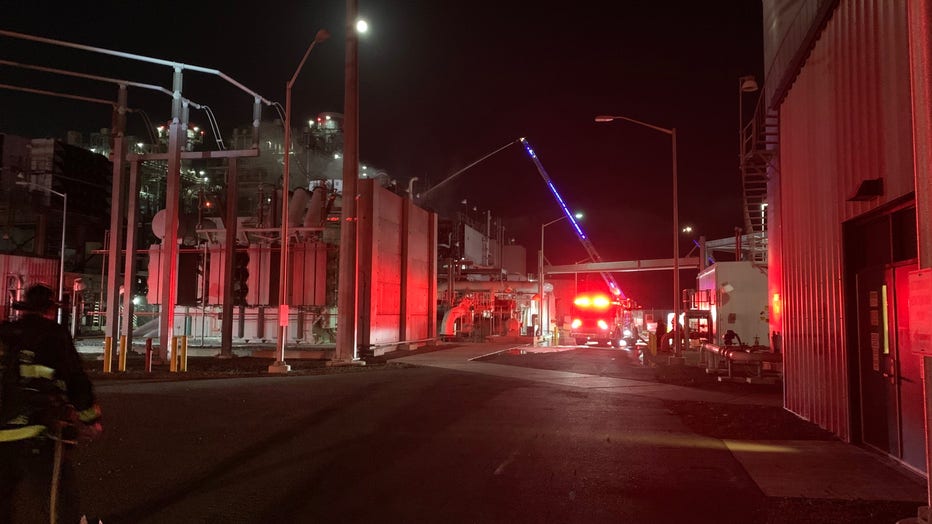 Firefighters respond to the explosion and fire at Calpine's Russell City Energy Center on May 27.

Firefighters quickly contained the flames using water and foam but there was concern over 45 hydrogen tanks and 25,000 gallons of hydraulic oil on site. Hazmat crews were called in from Fremont and Alameda County to help contain any runoff.

"We were able to surround the entire complex and take cooling measures on the hydrogen tanks that are in and about the property," Hayward Fire Chief Garrett Contreras said. "We were able to hold all of those fluids in the containment pond and we do not believe there was any released to the Bay."

As a safety precaution, police evacuated one square mile around the plant located on Depot Road, a largely industrial area.

"I was just shocked they asked us to leave," said Sandra Scott who lives near the plant. "It sounded like a boom."

Debris traveled hundreds of feet with some pieces weighing in excess of 50 pounds, according to the city. Many landed at Hayward’s wastewater treatment plant and required more than one person to lift.

Pieces of shrapnel that were found at Hayward's wastewater treatment plant after the explosion on May 27.

One 15-pound piece of twisted metal traveled some 1,200 feet and crashed through the roof of a trailer at Hayward’s homeless navigation center, melting the carpet, according to the incident report.

"That came through the roof," said Chuck Finnie, Hayward’s public information officer. "I was very concerned and very thankful nobody was hurt."

The entire incident is estimated to have caused up to $100 million in damage. Hayward said it is assessing all of the damage to public property and facilities and will seek compensation while supporting any private claims of damage.

Heavy piece of debris found at Hayward's water treatment plant following the turbine blast at the nearby Calpine plant.

"Calpine is now out of service until they make repairs and attempt to bypass the steam turbine," a city email states.

Calpine built and has operated the Russell City Energy Center since 2013, generating electric power for the grid and selling it to PG&E.

The company told KTVU the incident was a mechanical failure of the steam turbine during a routine shutdown.

The official cause has not been determined and it could be several more months. Calpine is doing its own root cause investigation. 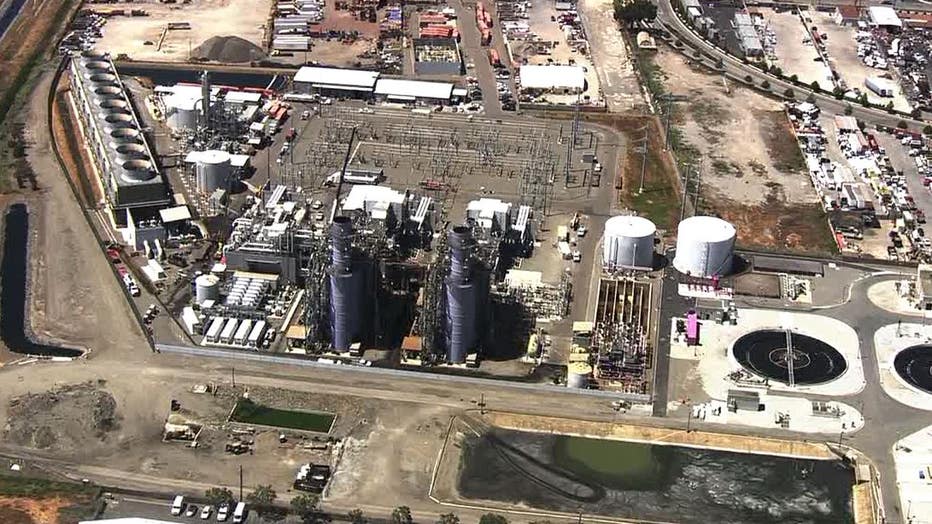 Records show Calpine has recently filed an application with the California Energy Commission to allow the plant to restart without the steam turbine. It would instead rely on the two natural gas combustion turbines to generate power.

The city of Hayward opposes that.

"We believe that is premature," Finnie said. "Before the power plant is restarted we need to know what the root cause of the explosion was, whether facilities in place to contain flying metal like that functioned as they intended and as importantly we need to understand what the environmental and health impacts might be under restarting the power plant under current conditions that are being proposed."

Without opposition, the plant could be permitted to start back up later this summer.

Residents and business owners who are concerned about the plant's restart are urged to take action this week by submitting a comment to the California Energy Commission. If objections are raised, the Commission will take them up at its July 15 meeting and ultimately decide if or when Calpine could get its plant back up and running.