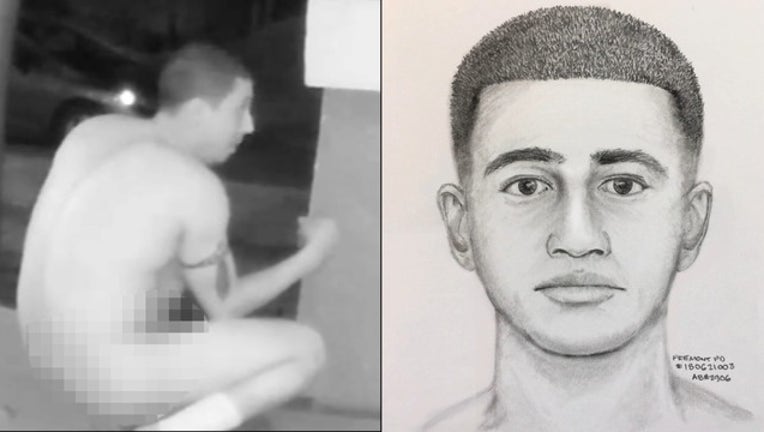 Police have connected the person in this screen shot and in a sketch they released last month to several indecent exposure incidents.

PLEASANTON, Calif. (BCN) - Detectives believe a naked suspect captured on security camera outside a Pleasanton home this week is the same man wanted in connection with four previous indecent exposure incidents in Fremont.

The most recent incident was reported on Thursday night, when a Pleasanton resident's security camera captured a nude man engaged in lewd conduct, police said.

A screen grab from the video shows a distinct tattoo encircling the man's upper arm. The tattoo is similar to one reported on a suspect's arm in an incident on June 21 in Fremont. That tattoo was described as a thin green ring or band that was similar to barbed wire or a rose stem with thorns.

The suspect is described as a white man in his early 20s, with dirty brown-colored hair kept in a fade-style haircut.

Fremont police say the first case connected to the suspect was reported at 12:39 a.m. on June 15, when two females inside a home on the 42800 block of Deauville Park Court looked outside and saw a man touching his genitals.

The third and fourth incidents were reported on June 27. About 9:15 p.m., two victims sitting in a car on the 39000 block of Blacow Road saw a naked man touching his genitals approach them. He tried to speak to them, police said. The suspect fled and got into a vehicle described as a newer model Cadillac SUV crossover 4-door, with dark-tinted windows.

Less than an hour later, about 10:07 p.m., in the 1400 block of Red Hawk Circle, the naked suspect approached a female victim who was walking her dog at an apartment complex.