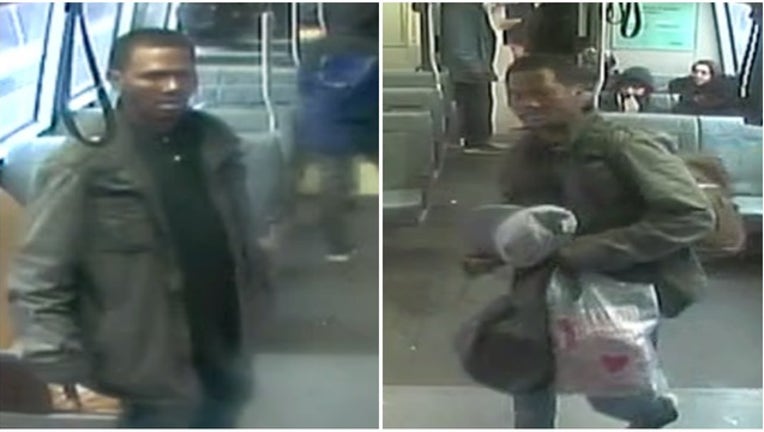 BART police on Saturday morning released surveillance camera images of the suspect in a stabbing that took place on a train Friday afternoon at the Fruitvale station in Oakland.

OAKLAND, Calif. (BCN) - BART's deputy police chief appealed to the public Saturday for help finding the suspect in the Friday stabbing of a man on a BART train in Oakland that sent the victim to the hospital.

The man suspected in the stabbing was fighting with another man on a Richmond-bound train just as it was pulling into the Fruitvale station at 2:48 p.m. Friday, said BART Deputy Police Chief Ed Alvarez. The suspect fled the station after the stabbing.

"There were several people on the train who saw what happened. Some came forward, and some did not," Alvarez said in a news conference at BART headquarters in Oakland. "We are asking anyone who recognizes the individual to come forward."

Earlier Saturday, the agency published a photo of the suspect taken from the agency's surveillance video, asking the public for help in identifying him.

The deputy police chief said the victim was stabbed twice, once to the left side of the face and the other to the right side of the neck. The victim was taken to the hospital, underwent surgery and was still hospitalized Saturday morning, according to Alvarez.

The victim's injuries are not thought to be life-threatening.

"This was not a random attack," Alvarez said. He said a disagreement arose between two individuals, "and it escalated to a physical fight with a knife being used."

Witnesses described the suspect as African-American, 30 to 35 years old, 5 feet 6 to 5 feet 8 inches tall with a slender build. He was wearing an Army green-covered jacket and blue jeans, and carrying a light green backpack and black duffel bag.

Alvarez said both violent and property crimes are down on BART, though "we are peaking a little bit in the San Francisco area because of cellphone thefts."

The agency has beefed up enforcement efforts over the past year, using overtime because "we don't have a lot of the manpower we are in need of right now," Alvarez said. He said BART is recruiting officers.