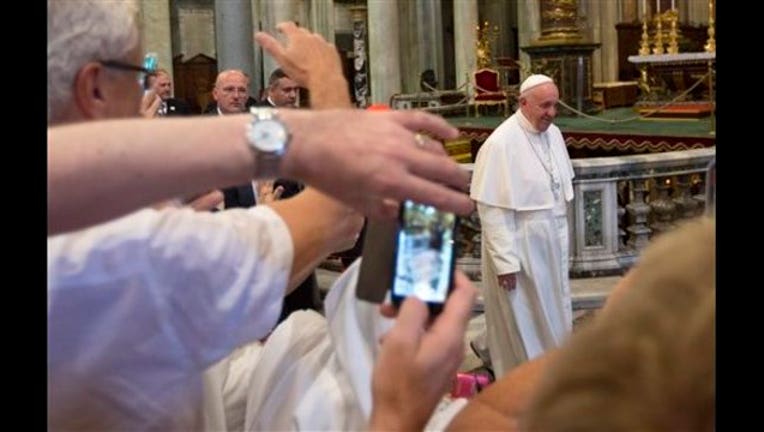 ABOARD THE PAPAL PLANE (AP) — Pope Francis has defended his words of consolation to U.S. bishops over the priest sex abuse scandal but says — for the first time — that those who covered up for abusers are guilty of wrongdoing.

In a wide-ranging press conference en route to Rome from his first-ever visit to the United States, Francis also declared conscience objection a "human right," explained his love affair with American nuns and discussed his own star-power, which was fully on display during his six-day, three-city tour.

He also invented a new Italian word to describe the exuberant reception he received in New York City: "stralimitata" — roughly, "beyond all limits."

On his last day in the U.S., Francis on Sunday met with five survivors of sexual abuse and issued a warning to bishops that they would be held accountable if they failed to protect their flocks.

While the Vatican has cracked down on priests who rape and molest children in recent years, it has long been accused of turning a blind eye to the bishops who moved abusers around rather than report them to police. Francis has agreed to create a tribunal in the Vatican to prosecute these bishops for abuse of office and has accepted the resignations of three U.S. bishops who mishandled abuse cases.

Francis defended his words of consolation to U.S. bishops in Washington earlier in the week, saying he wanted to acknowledge that they had suffered too. Advocates for victims had denounced his praise as tone-deaf.

"The words of comfort weren't to say 'Don't worry, it's nothing.' No, no, no. It was that 'It was so awful, and I imagine that you have wept so much,'" he said.

On Sunday, Francis directed his attention to the victims of abuse themselves, meeting with five survivors, including people who had been molested not only by priests but also abused by family members or educators. He apologized to them that often their accusations weren't taken seriously and promised to hold bishops accountable.

Francis said he understands how a victim or a relative of a victim could refuse to forgive the priest who abused.

"I pray for them, and I don't judge them," Francis said.

He recalled that in his previous meeting with survivors of sex abuse, in July 2014, one told him that her mother had lost her faith and died an atheist after learning that a priest had violated her child.

"I understand this woman. I understand, and God who is better than me understands," Francis said. "And I am sure that God received this woman. Because what was groped and destroyed was her flesh, the flesh of her daughter. I understand. I cannot judge someone who cannot forgive."

In another issue pressing on the American church, Francis was asked about the case of Kim Davis, the Kentucky county clerk jailed for several days after she refused to issue marriage licenses to gay couples despite the Supreme Court's ruling making same-sex marriage legal nationwide. Davis said such marriages violate her Apostolic Christian faith.

Francis said he didn't know the case in detail, but he upheld conscience objection as a human right.

"It is a right. And if a person does not allow others to be a conscientious objector, he denies a right," Francis said.

Francis said he was surprised by the warmth of the welcome he received in the U.S. despite criticism from conservatives over his environmental and economic messages.

"In Washington, it was a warm welcome, but a bit more formal," Francis said. "In New York, a bit 'beyond all limits.'"

"In Philadelphia, very expressive. Different ways, but the same welcome."

He said he was also impressed by the piety of Americans and gave thanks there were no incidents during the trip.

"No provocations, no challenges," he said. "They were all well-behaved, normal. No insults, nothing bad."

Conservative American commentators had been deeply critical of Francis' priorities prior to the trip, blasting his eco-focus as flawed and even criticizing his decision to streamline the church's annulment process by saying it amounted to a "Catholic divorce."

Francis denied the change would facilitate divorce, saying it merely simplified the church's process for determining if a marriage was valid.

Francis once again pronounced his love for American nuns, saying they had worked "marvels" in education and health care in the United States and were simply "great."

His praise was noteworthy, given the Vatican under his predecessor had launched a crackdown on the largest umbrella group of U.S. sisters, accusing them of straying from orthodoxy and not emphasizing doctrine enough. Under Francis, the takeover ended two years early without any major changes. A separate Vatican investigation into the quality of life of America's sisters similarly ended up thanking them for their selfless service.

Francis on two occasions during the trip gave the sisters public recognition and thanks. He also visited with one group of nuns, the Little Sisters of the Poor, who have challenged the Obama administration's health care insurance mandate.

After speeches in Congress and at the United Nations, and deeply moving gestures visiting with the homeless, immigrants, prison inmates and schoolchildren, it was suggested to Francis that he had become something of a "star" in America.

Francis dismissed the idea, saying power is a passing thing, and that true power is to serve others.

"I must still go forward on this path of service because I feel like I haven't done all I can," he said.

And besides, he said, stars eventually fade away.

"Being a servant to the servant of God is beautiful. And it doesn't fade away."