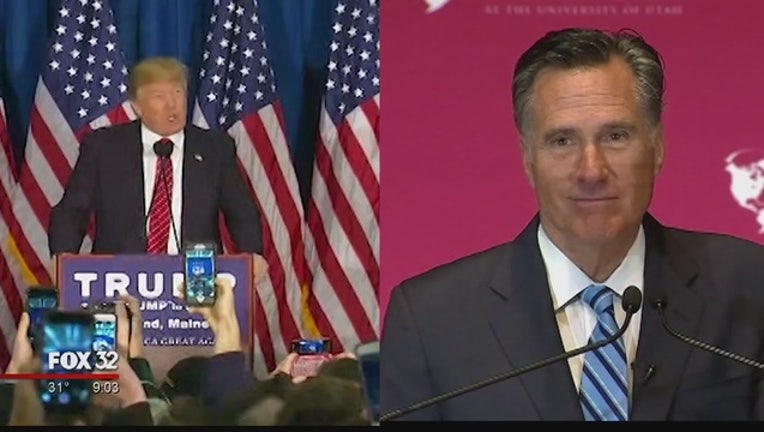 WASHINGTON (AP) - Most Republican leaders were silent or supportive of President Donald Trump's public call for another foreign government, China, to investigate his political foe, while a handful voiced concern that the president was trying to enlist a rival power in his reelection effort.

Several House and Senate leaders stayed mum as Trump escalated the controversy that has fueled an impeachment inquiry and plowed through another norm of American politics. The quiet continued as House Democrats released a trove of text messages showing U.S. diplomats conducted a campaign to push Ukraine to investigate former Vice President Joe Biden, a leading candidate for the Democratic nomination to face Trump next November, and Biden's son Hunter.

During a time when most Republicans are remaining silent on President Trump's comments about Ukraine and China relating to presidential candidate Joe Biden, Utah Sen. Mitt Romney is speaking up.

President Trump was not pleased with Romney's lack of support, taking to Twitter to respond, creating a hashtag #IMPEACHMITTROMNEY.

The mild-mannered, failed-presidential-candidate-turned-senator has shown he feels compelled to speak out against Trump at key moments. But he doesn't appear quick to the draw. While Trump detractors are looking to Romney to play a key role in rallying GOP opposition to the president in the unfolding impeachment saga, it's far from clear Romney wants the job.

Romney has left the door open further than most, said Reed Galen, a consultant who worked for Sen. John McCain, George W. Bush and Arnold Schwarzenegger before leaving the GOP in 2016. But "there's a long way from opening a door and walking through it."

The 72-year-old senator is unusually well-positioned to take on a president who remains broadly popular with Republican voters. His job security is all but guaranteed in conservative Utah, where he's a near celebrity. Many voters, particularly fellow members of The Church of Jesus Christ of Latter-day Saints, shared Romney's wariness about Trump.