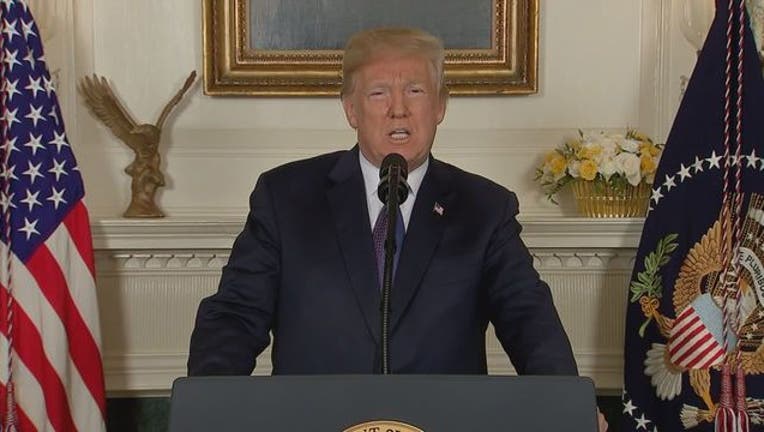 The Trump administration has gone to federal court to invalidate California’s sanctuary law that went into effect in January. The administration claims the law obstructs federal immigration agents from doing their work and violates the U.S. Constitution's supremacy clause. That clause gives federal law precedence over state measures. The case is pending.

President Trump said California's landmark sanctuary state measure “forces the release of illegal immigrant criminals, drug dealers and violent predators into communities and provides safe harbor to some of the most vicious, violent offenders on Earth.”

“We have the worst laws anywhere in the world for illegal immigration. There’s no place in the world that has laws like we do,’’ the president said during a one-hour roundtable.

In addition to being a sanctuary state, California has more than 500 sanctuary cities, including Oakland and San Francisco. Oakland Mayor Libby Schaaf has been a staunch supporter of sanctuary laws and in March warned the immigrant community ahead of a large-scale operation by federal immigration authorities.

"To me, that's obstruction of justice," President Trump said. "And perhaps the Department of Justice can look into that, Mr. Sessions."

Attorney General Jeff Sessions was at the table, but did not comment.

In addition to criticizing the Oakland mayor, President Trump blamed democrats and Gov. Jerry Brown for California’s approach to immigration.

“The concept (of sanctuary laws) that we are even talking about is so ridiculous,’’ the president said.

The president also indicated that support for anti-sanctuary city and state laws was growing across California.

“I’m greatly honored to be here with the courageous mayors and sheriff’s and local leaders from California. Great state. Each of you has bravely resisted California’s deadly and unconstitutional sanctuary state laws. You’ve gone through a lot too, although it’s become quite popular what you are doing.”

“There are more people in California than you know that support what you are doing. You have millions of people who want to see that our neighborhoods are safe and our borders are secure,’’ she said. “They don’t want another Kate Steinle.”

Melendez was referring to the fatal shooting of the 32-year-old Pleasanton native who was killed by an undocumented immigrant three years ago on a San Francisco pier. The shooting set off a national controversy and political debate over San Francisco's status as a sanctuary city.

Jose Inez Garcia Zarate had been deported five times when he shot and killed Steinle. Last November, a jury acquitted the Mexican national of all murder and manslaughter charges, but convicted him of being a felon in possession of a firearm.