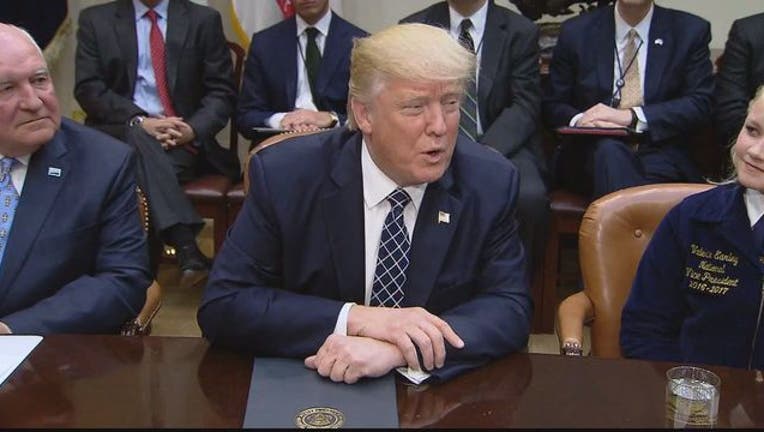 WASHINGTON (AP) — President Donald Trump on Monday said he will explore the possibility of higher gasoline and diesel fuel taxes, suggesting an increase could pay for his ambitious infrastructure plan.

"It's something that I would certainly consider," Trump told Bloomberg News in an interview.

The president indicated that the additional money would be directed toward highway construction and repair. That's been a problem area because fuel taxes have been unchanged since 1993 and created financial challenges for preserving the Highway Trust Fund.

To keep a positive balance in the trust fund, lawmakers have injected an additional $143 billion into it since 2008, according to a report last year by the Congressional Budget Office. Highway-related tax revenue raised just $37.4 billion in fiscal 2015, meaning that maintenance has been deferred as potholes and traffic jams have worsened.

It's a rare tax increase that enjoys support from the businesses most likely to bear the higher cost.

The U.S. trucking industry — which shoulders roughly half the cost of the fuel taxes — would welcome an increase if it's dedicated to fixing infrastructure. The industry benefits because better roads reduce travel times, curb the frequency of vehicle repairs and improve roadway safety.

"The cost of doing nothing is more expensive than a higher fuel tax," said Chris Spear, president of the American Trucking Associations.

Higher fuel taxes could increase costs for commuters — and could disproportionately hit lower-income workers, including Trump voters, who spend a greater percentage of their money on gasoline. But greater funding for highways could also increase the number of construction jobs in the economy, helping growth.

By increasing fuel taxes by 35 cents a gallon and indexing them to inflation, the federal government would raise an additional $473.6 billion over the next decade, according to the staff of the congressional Joint Committee on Taxation.

White House spokesman Sean Spicer said at the Monday news briefing that the president was only considering raising fuel taxes out of respect to requests from the trucking industry.

"He has an open mind," Spicer said.

Raising fuel taxes has generally been opposed by Republican lawmakers at the state level.

Asked if he'd rule out a gas tax increase, House Ways and Means Committee Chairman Kevin Brady, R-Texas, told reporters Monday, "In my view, yes." He added later, "But we're going to have that discussion with the White House and we want to learn more about the president's ideas."

A committee aide said later that Brady's answer reflected an assumption that infrastructure tax issues will be addressed separately by other House committees.

"Everything is a starting point," the president said.

Trump's proposed plan would slash the corporate tax rate to 15 percent and lower rates for individuals, likely increasing the deficit substantially if passed.