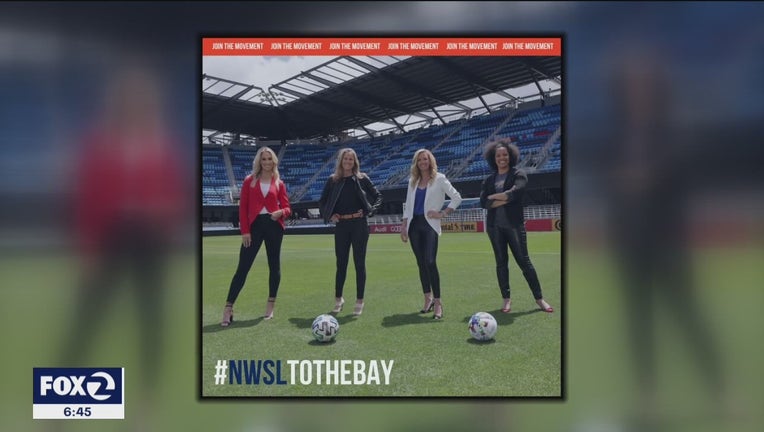 SAN FRANCISCO - With the announcement that the 2026 World Cup soccer games will be played in Mexico, Canada, and the U.S., including the Bay Area, soccer is a booming sport that is about to get bigger.

Four women's soccer stars have teamed up to bring a top pro league team to the Bay Area well before the World Cup comes knocking.

They are proposing, planning, and pursuing financing for a Bay National Women's Soccer League team.

Chastain is a double World Cup Champion and a double Olympic gold medalist.

"We want to develop the best brand globally that brings the best players, but we're gonna do it different and better," said Chastain.

The founding four have vast experience in not only the three U.S. professional soccer leagues, but foreign teams and United States Women's National Team. In fact, 13% of the players in the entire 12 team National Women's Soccer League have Bay Area soccer roots.

"We've got, I think, some unbelievable number of professional and national team players that are from our region. And so, that to me speaks about the quality of players in our area," said Chastain.

Sports consultant Andy Dolich has served in executive positions in the NFL, NBA, NHL, MLB and was general manager of a former North American Soccer League team. He knows the potential of such a Bay Area team.

"If you just look at the incredible success that the women's team has had in the World Cup and Olympics, etc. I'm a major proponent of it," said Dolich.

When you consider those who watch, attend, or play soccer, the Bay Area is already the nation's third biggest soccer market.

"The grace, rapidity, the way that they play in the game is tremendously marketable," said Dolich.

"We want the support that if we are granted that bid, the expansion bid, and we are fortunate to be a part of this movement and inflection in women's football that we have the community behind us," said Aly Wagner, one of the founders and an accomplished sports broadcaster.

The league will make the final decision if it will expand to the Bay Area, but the fabulous four women are hoping to so by 2024.