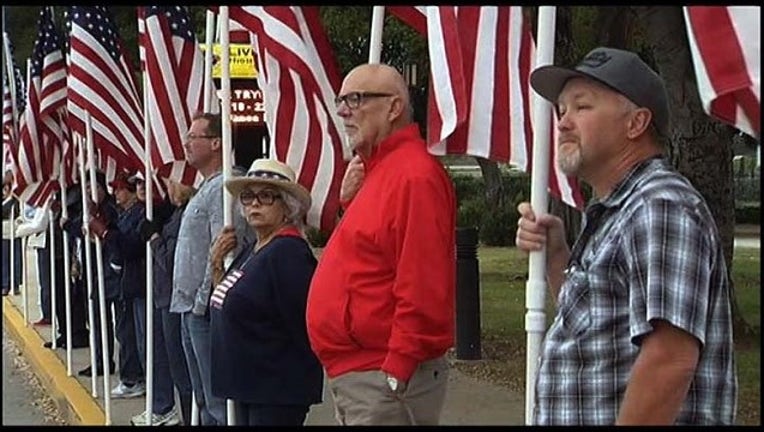 MORGAN HILL, Calif. (KTVU and wires) – A group of protesters stood outside a Morgan Hill high school Tuesday, holding American flags in the morning chill, rekindling a heated debate over the students right to wear American flag t-shirts to class.

The controversy began five years ago when a group of boys wore American flag t-shirts to school on Cinco de Mayo.

Fearing violence at the school with a 40 percent Latino student body, officials told the boys to change or hide their red-white-and-blue clothing by turning them inside out.

Lawsuits ensued and finally in March the U.S. Supreme Court refused to review a lower court decision in favor of the school officials.

In the lower court decisions, the judges cited the fact that Live Oak High School officials had documented at least 30 fights on campus during a six-year span between gangs and "between Caucasian and Hispanic" students.

The judges said the school administration had good reason to fear a violent reaction and to tell the boys not to wear the T-shirts on a Mexican holiday.

On Tuesday, Kendall Jones – the stepfather of one of the boys – joined the group of protesters.

"We were very disappointed about what happened with the Supreme Court," he said. "We wanted them to hear the case…To take it to the nation… Our respect for the flag and the Constitution was violated that day."

Jones said the protesters were not there to stop any Cinco de Mayo celebrations the students might have planned.

"We won't deny the right to a cultural celebration," he said.

Meanwhile, high school principal Lloyd Webb said aside from the curbside protest, he wasn't expecting any disruption to the students day.

"I expect the school will be like any other day of the year," he said. "They are over the protest…They just want to be kids and go to school… Many of them were in 4th grade when it happened."

Webb said there was a positive side of the controversy. The school put into place a program to help students learn about and promote cultural diversity.

"We recently won award for the climate on our campus," he said.