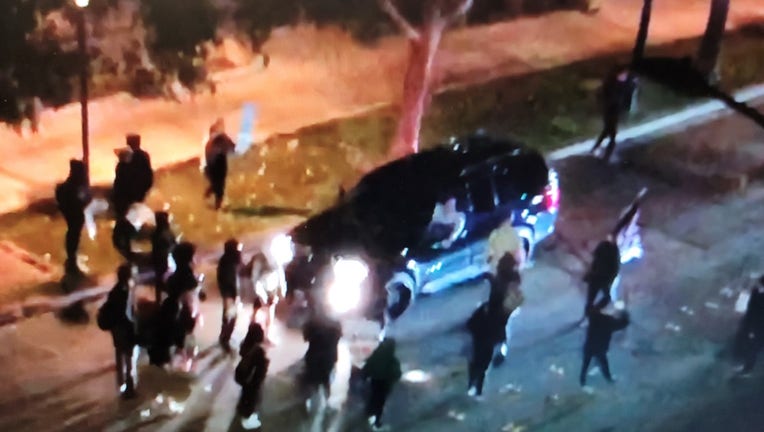 WALNUT CREEK, Calif. - One man was arrested after police broke up a group of 20 to 25 protesters marching Friday night.

Shortly after 9:30 p.m. Friday, two Walnut Creek police officers saw the protesters marching on North Broadway near Lincoln Avenue, near the city's main library downtown. An SUV headed north on Broadway was stopped by some of the protesters, who then surrounded it. Police said two or three protesters tried to open the front driver-side door of the SUV, while others from the group yelled at the occupants and kicked the car. Officers immediately activated the lights and sirens on their patrol cars, but the crowd continued kicking the SUV and trying to open the driver's door.

Some of the protesters then walked toward police, officers said, while others remained at the SUV. Officers then shot a 40mm "foam baton" round at a protester attacking the SUV; he was struck in the torso, police said.

Some of the protesters then walked toward police, officers said, while others remained at the SUV. Officers then shot a 40mm "foam baton" round at a protester attacking the SUV; he was struck in the torso, police said.

Michael Chapman, whom police identified as the protester struck by the foam baton, was later arrested on suspicion of false imprisonment and of obstructing an officer. According to Walnut Creek police, officers recognized Chapman as an "agitator and counter-protester" at a rally earlier Friday supporting President Donald Trump. At that rally, police said, they saw Chapman exposing a ballistic vest he was wearing under his jacket.

Chapman was taken to the County Jail in Martinez.

The driver and passenger in the SUV were scared but unhurt, police said.

The investigation into this incident remains active. Detectives are working to identify the other protesters who attempted to open the SUV's car door and who prevented it from immediately driving away, police said.

This happened in a city where police have been under fire for overreacting to some protests following May's killing by Minneapolis police of George Floyd.

In a news release describing Friday's incident, acting police Chief Jay Hill said, "The Walnut Creek Police Department is committed to ensuring individuals can exercise their First Amendment rights to protest peacefully, but we will not stand by and allow unlawful activity that puts public safety at risk."