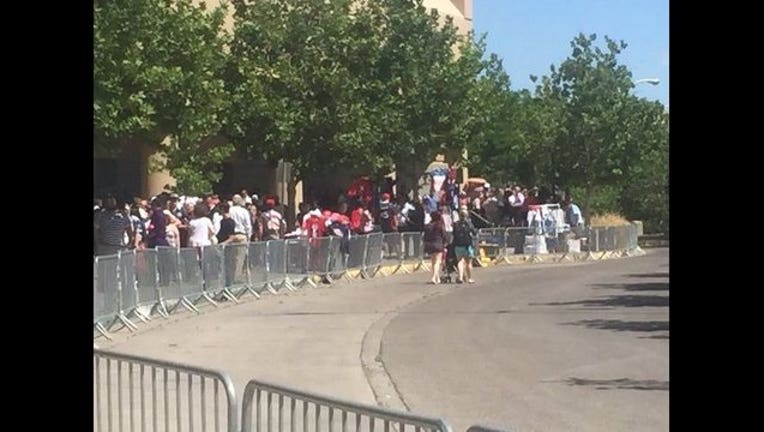 Police responded by firing pepper spray and smoke grenades into the crowd outside the Albuquerque Convention Center.

During the rally, the presumptive Republican presidential nominee was interrupted repeatedly by protesters, who shouted, held up banners and resisted removal by security officers.

The banners included the messages "Trump is Fascist" and "We've heard enough."

At one point, a female protester was physically dragged from the stands by security. Other protesters scuffled with security as they resisted removal from the convention center, which was packed with thousands of loud and cheering Trump supporters.

Trump responded with his usual bluster, instructing security to remove the protesters and mocking their actions by telling them to "Go home to mommy."

He responded to one demonstrator by asking, "How old is this kid?" Then he provided his own answer: "Still wearing diapers."

Trump's supporters responded with chants of "Build that wall!"

The altercations left a glass door at the entrance of the convention center smashed. During the rally, protesters outside overran barricades and clashed with police in riot gear. They also burned T-shirts and other items labeled with Trump's catchphrase, "Make America Great Again."

Tuesday marked Trump's first stop in New Mexico, the nation's most Hispanic state. Gov. Susana Martinez, head of the Republican Governors Association and the nation's only Latina governor, has harshly criticized his remarks on immigrants and has attacked his proposal to build a wall along the U.S.-Mexico border. The governor did not attend the rally and has yet to make an endorsement.

Trump said the number of people on welfare in New Mexico has tripled and said Martinez needs to do a better job.