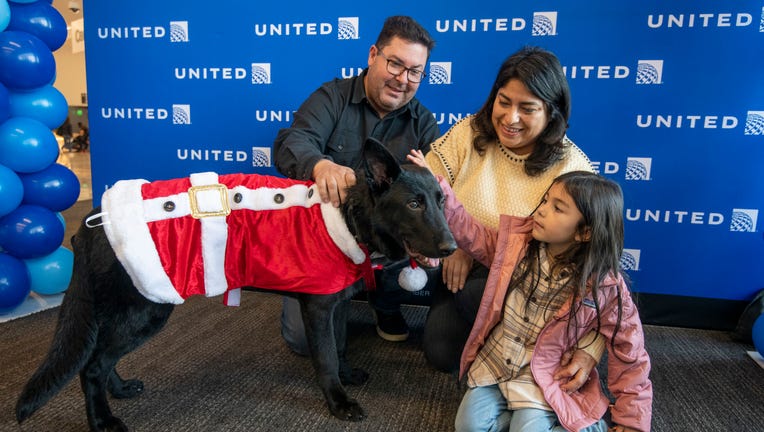 SAN FRANCISCO - A puppy who was abandoned at the San Francisco International Airport earlier this year recently found a forever home with an airline pilot and his family.

The 6-month-old German shepherd mix, named Polaris, was left behind in late August by an international traveler who arrived from China without the proper documentation for importing an animal, the Washington Post reported.

As a result, the traveler "chose to continue traveling on without his animal," according to a statement from the San Francisco Society for the Prevention of Cruelty to Animals (SPCA).

"United worked to ensure the puppy completed necessary requirements to enter the United States, including a quarantine period," the San Francisco SPCA said in a statement.

Polaris is pictured in a provided image. (Credit: United Airlines)

During a months-long waiting period, Polaris — named after United’s business class — was given a makeshift home in an airport office with a dog bed, toys, and treats, the Washington Post reported.

"From the moment Polaris landed in our care, our entire SFO United team cared for him 24/7 until we were able to get permission to keep him safely in the U.S.," Vincent Passafiume, United’s director of customer service, said in the SPCA statement.

When it was time for Polaris to finally find a forever home, United contacted the San Francisco SPCA for help with the adoption process — but stipulated that only airline personnel could apply to adopt him.

Tigre player Raúl Castro told a local news outlet that he adopted a stray dog who ran onto the field of a Christmas Eve soccer match after he found out that the dog was later struck by a car.

"We really wanted him to go to someone in our United family, because of how much our team rallied around him," Passafiume separately told the Washington Post.

Ultimately, United Captain William Dale and his family were chosen out of a number of applicants.

"It’s a great feeling to see this story come full circle and that Polaris will have a loving home with United Airlines Captain Dale and his family—just in time for the holidays," Passafiume said in the statement.

To celebrate Polaris’ new home, United hosted an adoption party on Dec. 15 at SFO and donated $5,000 to the San Francisco SPCA to support their year-round lifesaving work of helping animals. Photos show Polaris dressed in a Santa outfit and standing with his new family.

"We were honored that United called the SF SPCA to facilitate this adoption because of our knowledge and expertise in adoptions, as well as nearly 155 years of offering care and protection to pets," Lisa Feder, SF SPCA chief of rescue and welfare, said in a statement.

Over the holiday season, the San Francisco SPCA is offering free adoptions for all adult dogs (5+ months old) through Dec. 31 and giving 50% off the puppy adoption fee by completing an online Puppy Parent Orientation course, the organization said.