Aurora (left) and Ranger are the future parents of a puppy litter to be born at the Guide Dogs for the Blind. Feb. 12, 2020

SAN RAFAEL, Calif. - Like any baby shower, there was cake, balloons and party games.

But this shower, held on Wednesday, was for no regular mom. All the hoopla was for Aurora, a female guide dog for the blind, who is expecting to give birth to her fourth litter any day now.

This will be the first litter of puppies to be born at what is being described as a new, cutting-edge $23 million Puppy Center run by the Guide Dogs for the Blind in San Rafael, which will officially open in about 12 weeks.

It was also the first puppy shower.

"This is the first time we had a baby shower for one of our dogs," said CEO Christine Benninger. "We're celebrating in style."

Organizers say the Puppy Center is being created to establish a healthier environment for mothers to nurture their pups, and to serve the growing number of guide dogs who "transform the lives" of those who are blind or visually impaired.

All future guide dogs will be born in the Puppy Center and will spend the first critical eight to 10 weeks of life there.

The center will include areas for puppy birthing, puppy socialization, and the Learning Lab, an educational center to expand the public’s understanding of what it takes to make a successful guide dog.

Guide Dogs for the Blind prepares qualified guide dogs to serve and empower people who are blind or visually impaired. All of its services are provided free of charge, and the nonprofit gets no government assistance.

More than 15,000 guide teams have graduated from Guide Dogs for the Blind since it was founded in 1942. The organization was the subject of an award-winning 2018 feature-length documentary called Pick of the Litter, which was developed into a television docu-series by the same name, which debuted late last year on subscription streaming service Disney+.  For more information on Guide Dogs for the Blind, visit guidedogs.com. 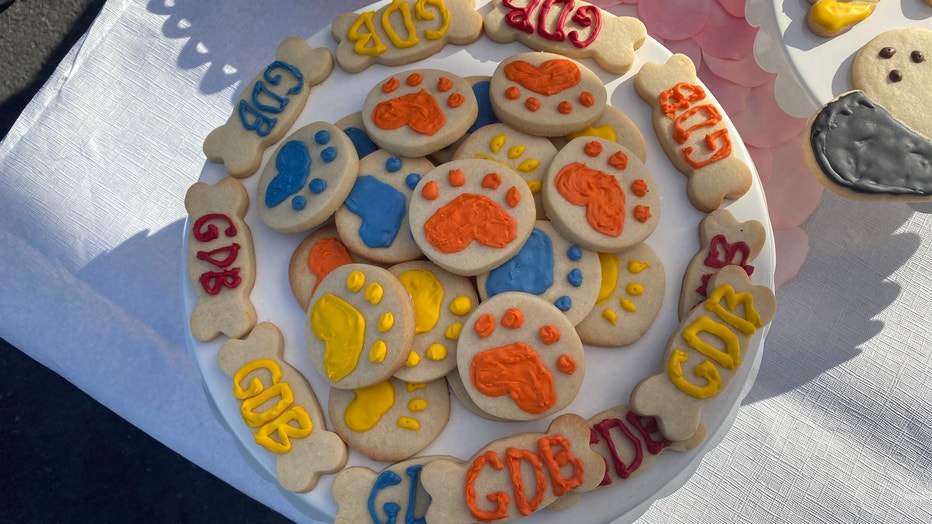 A bronze sculpture of a new mom and her litter of puppies at the Guide Dogs for the Blind's new Puppy Center.

There was cake at a puppy shower for the new Puppy Center run by the Guide Dogs for the Blind. Feb. 12, 2020

More than 15,000 guide teams have graduated from Guide Dogs for the Blind since it was founded in 1942.