SANTA CLARA, CALIFORNIA - JANUARY 08: Brock Purdy #13 of the San Francisco 49ers looks on during the second half of the game against the Arizona Cardinals at Levi's Stadium on January 08, 2023 in Santa Clara, California. (Photo by Thearon W. Henderso

SANTA CLARA, Calif. - Brock Purdy threw three touchdown passes for his sixth straight game with multiple TDs and the San Francisco 49ers clinched the No. 2 seed in the NFC playoffs with a 38-13 victory over the Arizona Cardinals on Sunday.

Purdy overcame two sacks by J.J. Watt in the final game of the star defensive end’s stellar career and connected with George Kittle twice and Christian McCaffrey once on TD passes to lead the Niners (13-4) to their 10th straight win to end the regular season.

San Francisco beat out Minnesota on a tiebreaker for the second seed, assuring the 49ers won’t have to go on the road before the NFC title game. The Niners weren’t able to secure a first-round bye because Philadelphia beat the New York Giants.

The Cardinals (4-13) ended the season going in the opposite direction with seven straight losses to tie a franchise record for losses in a season.

The game started well for Arizona when fourth-string quarterback David Blough connected on a 77-yard TD pass to A.J. Green off a trick play on the second play from scrimmage.

About the only other highlight for the Cardinals was the two sacks by Watt, giving the three-time Defensive Player of the Year 120 1/2 in the regular season and playoffs in his 12-year career.

McCaffrey answered Arizona’s quick score when he caught a short pass from Purdy and turned it into a 21-yard score to extend his touchdown streak to six straight games.

The first of two interceptions by Tashaun Gipson Sr. set up the 49ers’ second touchdown when Elijah Mitchell ran it in from 5 yards out in his first game back from injured reserve.

Mitchell added another TD run in the third quarter as he tunes up for the playoffs.

Purdy found Kittle from 4 yards out with 19 seconds left in the half to make it 21-13 on Kittle’s 10th TD catch of the season. The two connected again late in the third quarter, giving Kittle seven TD catches from Purdy in the last four games. 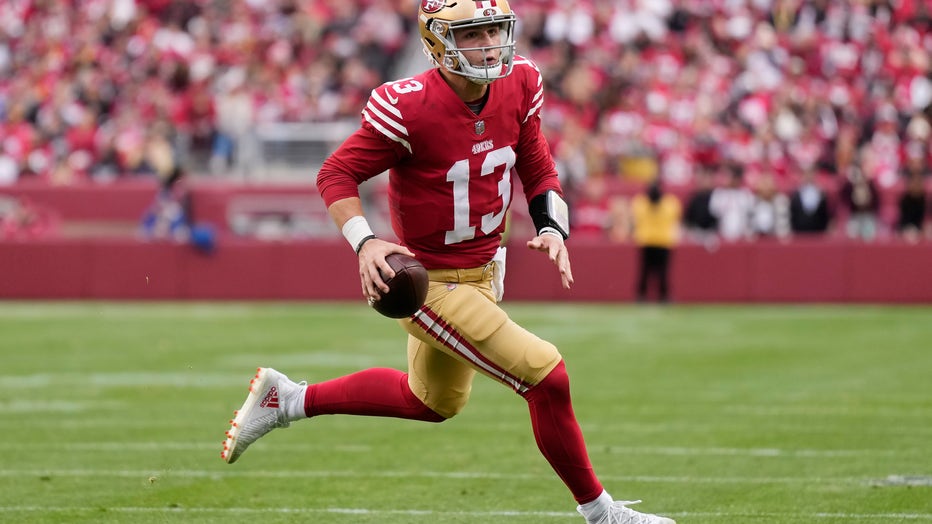 SANTA CLARA, CALIFORNIA - JANUARY 08: Brock Purdy #13 of the San Francisco 49ers runs with the ball during the third quarter against the Arizona Cardinals at Levi's Stadium on January 08, 2023 in Santa Clara, California. (Photo by Thearon W. Henderso

Watt took a ceremonial bow in the first quarter after bringing down Purdy — the 50th QB he has sacked in the regular season or playoffs.

Watt announced his decision to retire late last month and responded with three sacks in his final two games to reach 12 1/2 on the season.

The Niners allowed a long TD pass for a second straight game and that has been one of the few issues that has plagued one of the stingiest defenses in the NFL this season.

The TD pass to Green was the sixth pass play of at least 50 yards this season allowed by San Francisco, tied with Green Bay for the most in the NFL and one more than the Niners allowed in the last two years combined.

Cardinals: Blough left in the third quarter to be evaluated for a concussion and didn’t return. He left after losing a fumble on a sack by Jordan Willis for his third turnover of the game.

49ers: LB Demetrius Flannigan-Fowles (neck) left in the first half and didn’t return.

49ers: The wild-card round against either Green Bay, Seattle or Detroit next weekend.