Oakland police are investigating how four people got shot late Tuesday night and two drivers crashed into each other, before hitting multiple parked cars. Officials said all four people are at the hospital and are not expected to die.

OAKLAND, Calif. - A couple sleeping and two other victims were shot and wounded after a chaotic, rolling gun battle and car crash in East Oakland, police said Wednesday.

Mario Nunez's Ring cameras captured the sound of gunfire near 92nd Avenue and Peach Street at about 10:30 p.m. Tuesday.

"I heard about 50 gunshots…and then there's a break, and then again and again," Nunez said. "It was like a gun battle that was going on."

When police arrived, they found a couple who had been struck by gunfire. The husband told KTVU off-camera that he was shot in the groin, his wife in the stomach, and that they were fortunate to be OK.

Two other gunshot victims showed up at the hospital.

"They were driving and shooting and an accident occurred," Reid said. "They jumped out of the car, and the gun violence continued on the street."

More rounds were then fired by numerous shooters and captured by ShotSpotter, the city's gunshot-detection system.

"It sounded like a war zone, when I listened to the hundred rounds that were fired in this incident," said Reid, who heard the ShotSpotter audio.

A woman who lives nearby and did not wish to be identified told KTVU that chaos broke out.

"I just heard a lot of gunshots just started going off, and everybody started running and screaming," she said.

The neighborhood was littered with bullet holes, evidence markers and chalk circles in the hours after the gunfire. KTVU found a .223-caliber rifle round lying on the street.

A bottle of tequila was also left behind by a woman who was hurt.

"The Patron bottle with her blood on it, the girl who was shot," the neighbor said.

Reid said, "This harmful behavior that we're seeing with people sleeping in their homes, people attending a memorial, innocent bystanders caught up in the craziness of what's taken place." 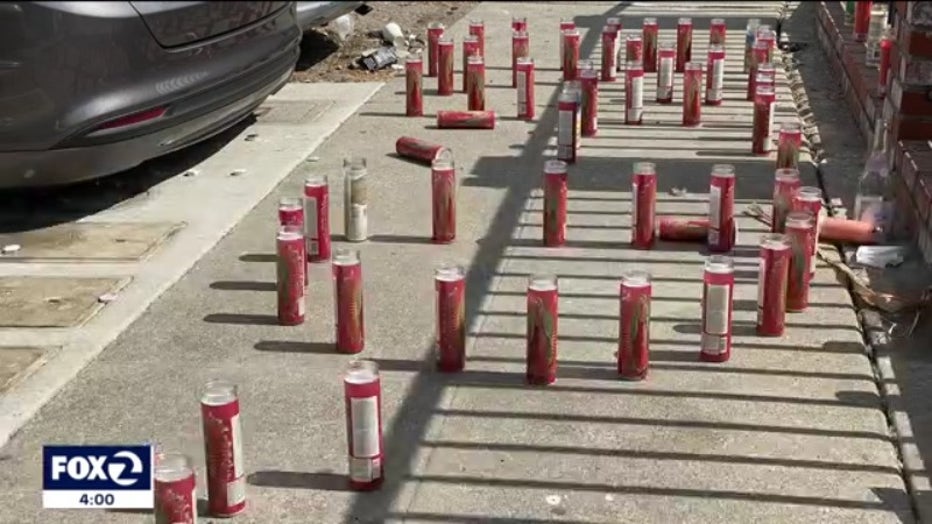