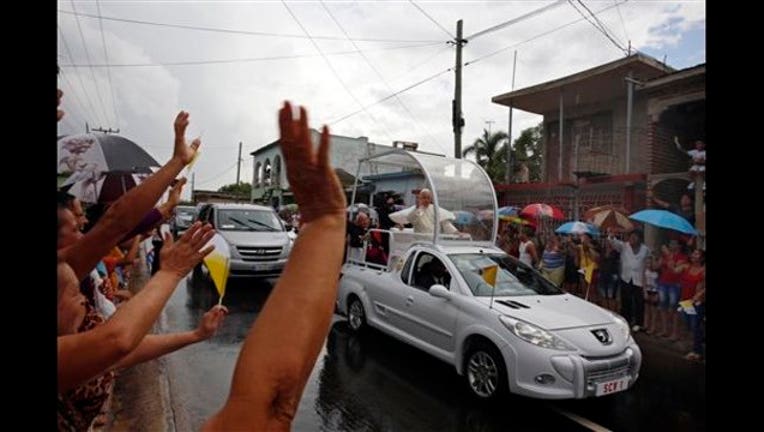 Pope Francis greets people from his popemobile on his way to the Hill of the Cross in Holguin, Cuba, Monday Sept. 21, 2015. (AP Photo/Enric Marti)

VATICAN CITY (AP) - Pope Francis is on a 10-day trip to Cuba and the United States. Test your knowledge about all things papal with this quiz. Answers are at the end.

1) Which is NOT one of Pope Francis' official titles?

a) Emeritus Bishop of Buenos Aires

b) Primate of Italy

d) Successor of the Prince of the Apostles

2) The white skullcap that Pope Francis wears is called a:

3) Which country did NOT get its first cardinal during Pope Francis' consistory in February 2015?

4) Pope Francis began, but never completed, a master's thesis on:

5) Pope Francis has sneaked out of the Vatican to:

a) feed the homeless

d) get a slice of pizza

7) The pope's favorite sports team is:

8) The pope belongs to this religious order:

b) Society of Jesus

1) Which is NOT one of Pope Francis' official titles?

2) The white skullcap that Pope Francis wears is called a:

d) zucchetto. Francis' zucchetto has become something of a collectors' item, with the pope frequently swapping out his white skullcap for ones offered to him by the masses during his weekly general audience.

3) Which country did NOT get its first cardinal during Pope Francis' consistory in February 2015?

b) Papua New Guinea. Francis has revamped the geographic distribution of the College of Cardinals by naming "princes of the church" from far-flung countries in a bid to give "peripheral" communities representation at the highest levels of the church. Tonga, Myanmar and Cape Verde all got their first-ever cardinals. During his papacy, Francis has reduced Europe's share of the cardinals who can vote for a new pope to less than half of the total for the first time ever.

4) Pope Francis began, but never completed, a master's thesis on:

b) Romano Guardini. Guardini was an Italian-born German philosopher who was an enormously influential Catholic thinker in the mid-20th century. In 1986, after Francis' tumultuous leadership of the Argentine Jesuits and subsequent position as a seminary rector in Buenos Aires, the future pope was sent off to Germany to begin a dissertation on Guardini that he never completed. Guardini, however, remained deeply important to him: Francis cited Guardini eight times in his ecology encyclical "Praise Be" -- more than any modern thinker other than a pope.

5) Pope Francis has sneaked out of the Vatican to:

b) buy new glasses. Francis has said that what he misses most about being pope is that he can no longer walk around town, visit with the homeless or go out for a pizza. However it was a more mundane errand that prompted him to slip out of the Vatican on Sept. 3 with just a bodyguard and driver: to get a new set of lenses for his eyeglasses.

c) Domus Sanctae Marthae. Unlike his predecessors, Francis has eschewed the lush Castel Gandolfo papal summer retreat overlooking Lake Alban. Instead, he vacations in the same Vatican hotel where he lives: Room 201 of the Domus Sanctae Marthae, a modern residence on the edge of the Vatican gardens where visiting priests and other officials stay while on business at the Vatican.

7) The pope's favorite sports team is:

d) San Lorenzo. Francis is a lifelong fan of the Buenos Aires soccer club and has kept up his membership (No. 88235N-0). He has met several times with the team since his election and has an impressive collection of San Lorenzo jerseys that have been given to him.

8) The pope belongs to this religious order:

b) Society of Jesus. Francis joined the Jesuits while he was in the diocesan seminary and was ordained a Jesuit priest on Dec. 13, 1969. Much of his spirituality and style -- examination of conscience, long periods of discernment and commitment to social justice -- can be traced to his formation as a Jesuit.

d) mate. Like most Argentines, Francis adores his mate, the traditional tea that is sipped through a straw from a gourd. Francis routinely takes a sip when a gourd is handed up to him from the general public -- a potential health concern that has never seemed to faze the pope though it must give his doctors and bodyguards pause.

a) The United States. This will be Francis' first time on U.S. soil, and he's also a first-time visitor to Cuba. The Vatican says Francis did once change planes in Cuba, but never actually left the airport.