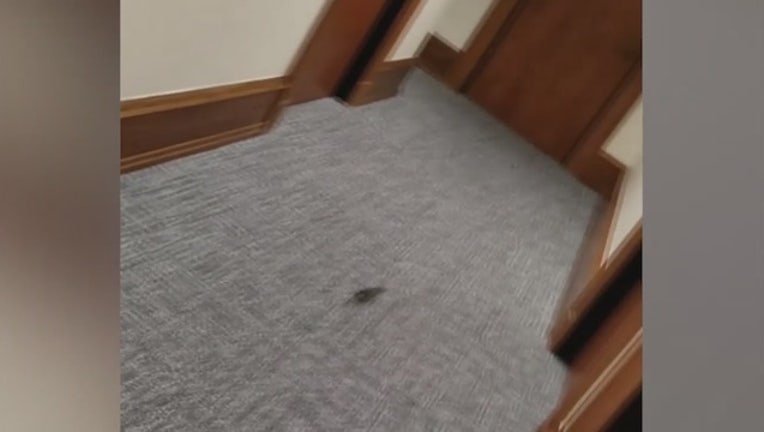 "We had an employee or two mention they heard something in the ceiling," Wesson said Thursday as he led a tour through his office, where he recently had all the rugs ripped out. "Then we had an employee spot what she believed to be paw prints."

After a flea hidden in a rug pounced on one of his employees late last year, Wesson had enough: He shut down the office and had all the rugs removed.

Now, after learning that an employee in another City Hall office became infected with typhus around the same time, he has asked the city's staff to examine how much it would cost to remove all the rugs in the 91-year-old building and its City Hall East annex.

"When you go to work the only thing you should be concerned about is getting to work on time," Wesson said. He wants both rug removal and better forms of vermin control. "You shouldn't be worried about coming to work and catching some virus."

Downtown is in the midst of a typhus outbreak, according to health officials, with several homeless people who live near City Hall among those afflicted. It flourishes in unsanitary conditions and is often spread by infected fleas hitching rides on rats. It is rarely fatal when treated quickly with antibiotics but epidemics killed thousands in the Middle Ages.

Wesson acknowledged he hasn't actually seen a flea-bearing rat in his office but he's talked to enough people at City Hall to have no doubt there are plenty of them there. In any case, something was definitely chewing on his potted plants before he removed them on the advice of exterminators.

"We had a lovely orchid right there," he said pointing to an empty plant container.

He believes many of the rats are relatively new arrivals, displaced when the city began tearing down its old police headquarters next door.

On Thursday City Hall docents, security guards and employees in several other council offices said they haven't seen any rats either. But they also don't doubt they are there.

"When we're working late in the office sometimes you hear something in the wall," said Mark Pampanin, communications deputy for Councilman David Ryu.

Wesson says he doesn't know how much it might cost to replace all of the 27-story building's rugs, some of which are decades old. But he doesn't plan to replace his at all.

He had the original concrete floor it covered polished and says he and his staff love the new retro-LA look that's perfect for an iconic building.

The white art-deco structure has played a prominent role in such classic films as "Chinatown" and "LA Confidential," been a centerpiece of almost every skyline shot in decades of movies and been featured in TV shows from 1950s programs like "The Adventures of Superman" to Billy Bob Thornton's present-day series "Goliath."

That history is one reason the folks around the corner at Ryu's office said they pulled their rugs after the councilman took office in 2015, years before the rat problem began.

"That sort of standard-issue government carpeting wasn't really our style," Pampanin said. "This building, it's living history from 100 years ago - and the floor is lovely. And now it seems our aesthetic has served us well in other ways as well."