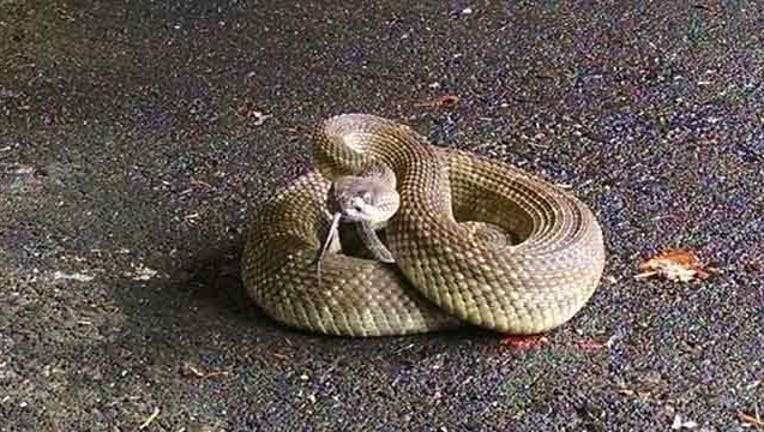 OAKLAND, Calif. - After last year’s wet winter and the current warm and dry weather, rattlesnakes are coming out of hibernation, leading to a spike in rattlesnake bites locally and across California.

The California Poison Control System recently sent out a warning about the danger of rattlesnakes after the agency received roughly 20 rattlesnake bite calls statewide in about six weeks. And one snake removal expert said he’s seen at least a 15 percent increase for service because last year’s heavy rainfall led to a bumper crop of yearlings this year. Snakes are generally more active in wet weather.

Two weeks ago, a Girl Scout was taken to a hospital by ambulance after she turned over a piece of wood at suburban Sacramento nature park and a baby rattlesnake bit her finger. Last month, a 79-year-old man was airlifted off Mt. Tamalpais in Marin County with two snake bites after he reached out to pick up a rattler while hiking.

Bites have also been reported near Mt. Diablo State Park and in Concord open space. All the victims are recovering from their injuries, which can run the gamut.

A rattlesnake bite can produce painful swelling, bruising, tissue destruction, excessive bleeding and, in rare cases, can be fatal. Most bites occur between the months of April and October and even baby rattlesnakes can possess dangerous venom.

“If you are bitten by a rattlesnake, immediate medical attention is critical,” said Dr. Cyrus Rangan, assistant medical director for the California Poison Control System. “Severe or even life-threatening symptoms may occur within minutes after the bite, or in other cases may begin after a couple of hours. In either event, your best bet is to get to a hospital as soon as you can.”

Rattlesnakes do not always make a rattling sound, but experts with the East Bay Regional Park District, which also sent out a recent warning about rattlesnakes, say there are many ways to stay safe.

First, leave snakes alone. Never try to capture or harm a snake as all park wildlife is protected by law. If you see a snake on a trail, wait for it to cross and do not approach it. Then move carefully and slowly away.

If you are bitten by a rattlesnake do the following: