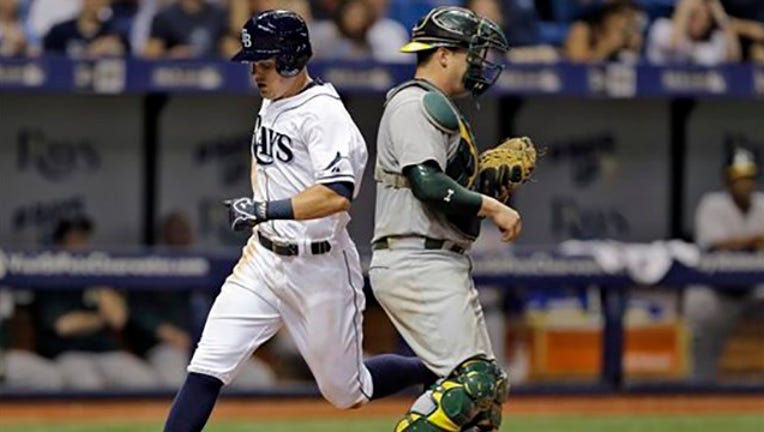 ST. PETERSBURG, Fla. (AP) — It was another rough night for the Oakland Athletics — offensively and physically.

In a 3-0 loss to the Tampa Bay Rays on Thursday night, the struggling A's lost for the 13th time in 15 games and lost relief pitcher Edward Mujica to a fractured right thumb.

"It's crazy," said Mujica, who fielded a hard ground ball hit by Bobby Wilson in the seventh inning, cutting and fracturing the thumb. "We've got a rough time right now, and I came here to help the bullpen try to get some wins. It's bad to be in this position right now."

Mujica will go on the disabled list, but the fracture is minor and the A's hope surgery will not be necessary.

Colome (3-1) gave up four hits over five innings. Steve Geltz, Kevin Jepsen, Jake McGee and Brad Boxberger, who pitched the ninth for his 12th save, all threw an inning.

DeJesus had an RBI double in the fourth and hit a solo homer during a two-run seventh that put Tampa Bay up 3-0.

Oakland had its best scoring chance when Billy Burns led off the game with a triple. But Burns failed to tag up and score when Marcus Semien followed with a fly ball to center field.

"He just took off too early and once he realized he did that, he had to go back," manager Bob Melvin said. "(It was) not a good game for us obviously. We had a chance to get a lead and after that never really put any pressure on them."

"We just need to relax," said catcher Stephen Vogt. "The thing you've got to realize is pitchers get nervous, too, when there's runners in scoring position, but that's not something you realize when you're struggling as a team in that situation."

Oakland also failed to score in the fourth after loading the bases with two outs when Sam Fuld, mired in a 3-for-48 slide, hit a grounder.

The Athletics put two on with two outs in the ninth before Brett Lawrie struck out.